Vinny called me on my cell phone while I was still at work today. "Mom, can I take the bass boat to Island Lake? Austin and I want to go muskie fishing!"
Of course I said yes. This being late October in northern Minnesota, the chances for good fishing days are getting slimmer by the day. And today was the annual Minnesota teacher's conference, a school holiday. And, a 16 year old, still grasping the idea of being able to take a boat to a lake, and with the knowledge and experience to launch and load a boat. Perfect opportunity.
Nina went with the boys and operated the trolling motor. It was a chilly day out there, with intermittent rain showers. They talked with a few locals, who were mostly taking their pontoon boats out of the water for the winter. They came back well after dark, Vinny triumphantly carrying a landing net with two nice northern pike into the house, oozing pike slime onto the floor. "What should I do with these tonight?"
"Put them in the cooler on the deck, or back in the live well." With nighttime temperatures hovering around freezing, those fish should be fine. And I am looking forward to a fish fry tomorrow!
at 9:04 PM 2 comments:

The kids and I drove up to Ashland, Wisconsin for the weekend. We were going to go last weekend for Apple Fest in Bayfield, but the weather did not look good then. The Hermit had one of our boats at Wisconsin Indianhead Technical College for some class wiring practice, and we wanted to give it a try. It was too windy on Saturday, but at least it was from the right direction to help the runners in the Whistle Stop Marathon. Nina and I made plans to run the half marathon next year!
The Hermit's college student apartment is about five blocks from the lake front. Saturday morning I woke up too early for a Saturday, around 6:30. I decided to walk down to the lake and see the sun rise. I ended up capturing one of the most subtly beautiful skies I have ever seen. 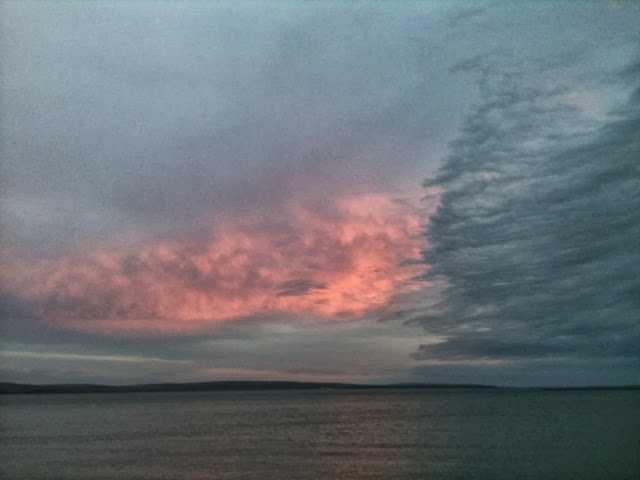 Sunday morning I was a bit more ambitious with my walk. I headed down the street to the intersection with a paved trail that had once been one of the railway lines leading down to the now-demolished ore dock that had once been the city's identity. I followed the trail east for a way before I ended up heading, as always, for the water. I found another trail that led along the lakefront for a while. 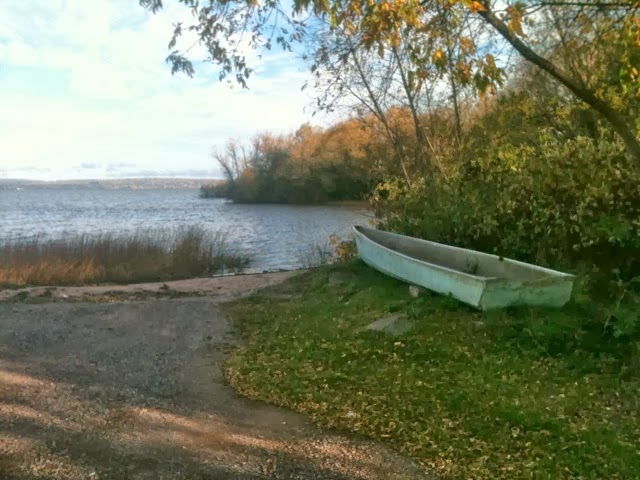 Sunday had a slight breeze from the northwest, perfect for fishing Chequamagon Bay. Perfect, except the fish were not biting. But, I did not mind. I was busy falling in love with the big lake. 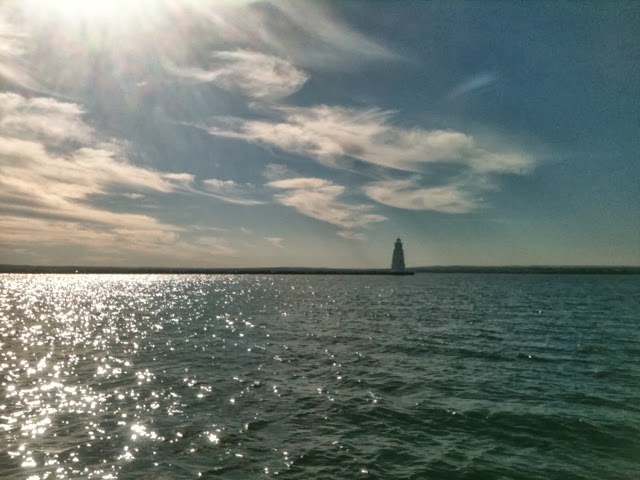 I don't know, I have not had this feeling of love for a place in a long time. I do know I need to be near water, which is why I ended up working with fish. But this bay of Lake Superior in northern Wisconsin feels like home, in a place I have spent very little time.
at 10:01 PM 4 comments: 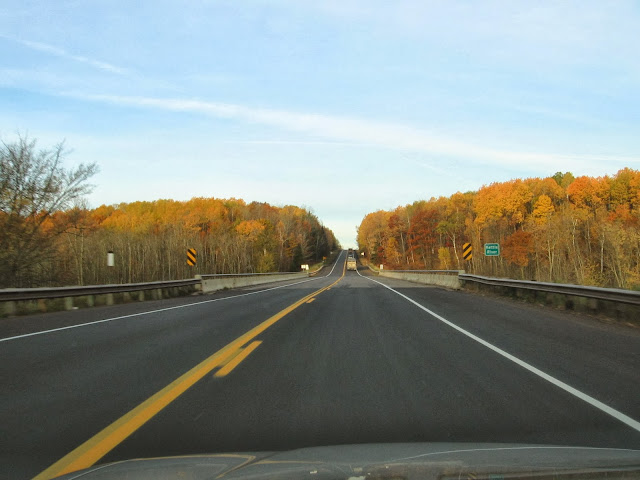 I am thankful that, if I have to have a 30 minute commute to work, at least I get to do it in light traffic with some gorgeous scenery along the way, especially this time of year. According to my computer, this photo was taken October 6, 2006. The leaves looked about the same today as I crossed the Kettle River.

I savor my drives to and from work this time of year, the brilliance and ever changing hues of the leaves. I know that in just a few weeks, cold gray November will be upon us, which makes the beauty of the leaves and the blue sky even more precious. 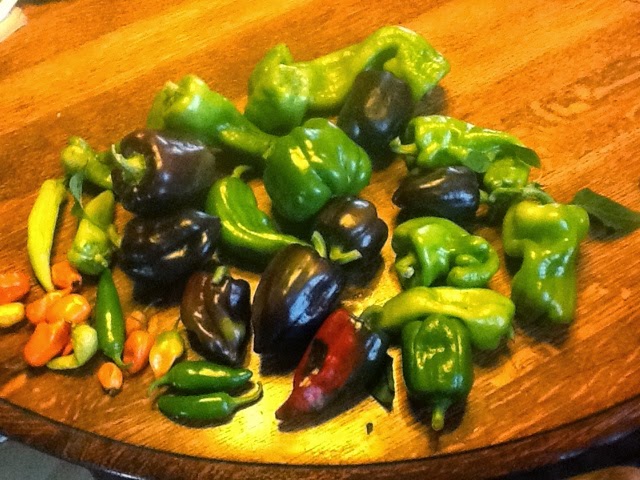 This is a test of the Blogger app. Posting pictures from my iPad has been one of the major hurdles in resuming blogging on a regular basis. I had been going through Safari, and met with some success, but it seems they changed that on me. At the same time, they changed the Blogger app, and it looks better. So I leave you with a photo of my recent pepper harvest (yum!) and a vow to get this whole blogging thing together again.
at 8:26 PM 4 comments:

Taste a little of the summer

One of the highlights of my summer was playing my first gig as a "featured artist". I have been playing and singing contemporary folk music for about 20 years now, but it has mostly been a "when I have time" thing. Funny how in real life, the things one is most passionate about almost always get a lower priority than earning enough money to pay the bills. I am also in the stage where my kids' interests (volleyball, baseball, band, fishing, etc.) take priority. Most of the time.

There are not a lot of opportunities to play music around here, although if I drive about 60 miles north to Duluth, there are a number of bars and coffeehouses that feature local, live music. But, largely through Facebook, I have gotten to know a few local musicians. Last summer, when the Moose Horn and Kettle rivers flooded, I volunteered to play at a benefit concert. The coordinator of the event, Luke, contacted me this spring about a concert series he and his church youth group were putting together, largely because they had felt the need for continued community service after the flood. Luke and the young people of Barnum put in a lot of hard work and planning to create "Chillin' in the Pavilion", the summer concert series at a log pavilion at the Carlton County fair grounds.

It was a great gig, from my perspective. A good number of people showed up, not just Facebook friends I had invited. It was relaxed, and well suited to the style of music I play. My set list included songs by Kate Wolf, Greg Brown, John Prine, Townes Van Zandt, Guy Clark, Iris DeMent, and one original song, which I will post soon.

This song, "Canned Goods", is, to me, everything gardening and home and family is about. Peaches on the shelf, potatoes in a bin. Supper's ready, everybody come on in. Taste a little of the summer, Grandma's put it all in jars.

Tonight I am proud of the fact that I managed to get a fire going in the wood stove on the first try. For some reason, fire starting has been a skill that has eluded me, and I have generally left it up to The Hermit. But since The Hermit is away during the week now, taking classes in Ashland, Wisconsin, weeknight fire starting duties are up to me for the most part.

It is supposed to be rainy all weekend, with high temperatures in the 50's. Very normal for this time of year, but I still feel I am owed a warm autumn, given the very late spring we had this year. My garden may have finally given up the ghost with 30 degree temperatures the other night, but I'm not ready to give up September into October.

I also started working on a project. On July 3rd, I had a wonderful time playing a one hour set of music at a pavilion at the Carlton County Fairgrounds. I hope to share some video on this blog soon, but I was also able to get a pretty good quality audio recording through the sound board. My task now is to break a 47 megabyte MP3 into individual tracks. A friend has assured me I can do this with the GarageBand app I have on my iPad. Big learning curve for me, but it is useful knowledge. And, I am grateful I have had some musical opportunities this year.

Back to the garden

I took a break from gardening last year, and I really missed it. Missed it, and kicked myself for being lazy enough to not put the effort into gardening. I had some problems to work through; my raised beds were falling apart and getting overgrown with some very stubborn grasses with tough roots, and the alternative was to plow up a new plot, which we did not have the equipment for. So I did a modest container garden on the front deck, with minimal results. The plot I had thought about plowing up got flooded in the Great Memorial Day Flood of 2012, so I was glad I had not gotten around to doing much with it.

This year we thought about it, and thought about it, and finally by chance found a local guy who had the right equipment to plow up an area that was outside of the limits of the flood. It was part of our old horse pasture, so the soil was very rich. Spring came late to Minnesota in 2013, and by the time we got the plot prepared it was early July. We bought leggy tomatoes and other greenhouse closeout plants at a discount, planted what we could, and hoped for the best.

As of today, October 2nd, I have some plants still growing although we have had a couple frosts. I did well with zucchini (how can you go wrong there?), and I will have my best pepper harvest ever. I harvested three red cabbages last weekend, first cabbages I have ever grown to a decent size, and I have had a few slicing cucumbers. I would have had more green beans, were it not for the deer. In future years I will need some sort of deer fence.

Tomatoes grew lush and green, but I will get few fruits. Deer, rot, and late planting all contributed. Likewise, most winter squash were planted too late, but I did harvest a couple spaghetti squash. A few other crops were a bust.

Still, all in all it was a success. I realized I NEED a garden to wander out to on a Saturday morning, and just marvel at things growing and possibilities. I missed having my own garlic; I will plant hardneck garlic yet this fall for next year. And I will get a deer fence.
at 9:41 PM 3 comments:

But, if it were that easy, why have I, and so many of my blogging friends, fallen out of the easy habit of blogging what we notice? We had a real community going there for a while, now it seems we have all migrated to Facebook. Not that Facebook is a bad thing, for me the connections it enables have been wonderful. And, I have to admit, it is a lot easier than blogging. However, I still have this urge to write, to expand my thoughts beyond a tweet or a status update. But I have gotten out of the habit.

I will attempt to get back into the habit. I will write about things I notice, hopefully without issues from iPad and iPhone photos (I have not taken a photo with a stand alone digital camera in a while.) I will write about this summer, about becoming the mom of a licensed driver, about gardening again after a hiatus, about the musical things I have done, about time passing and family and hope and despair. In other words, about life.