life is full of twists and turns

I've been in a state of disbelief for the last 24 hours. Remember the girl down the road whom I ended up giving rides to school last winter? Her mom passed away last week. I don't know any more details. I didn't even know until last night, when Starflower wanted to spend the night with the girl at her grandparents' house, which is about a mile away from us. I was wondering why this girl was staying at her grandparents' house with her uncle. So I drove over there to check things out, and learned the sad news.

It's a double whammy. Her uncle was there because her grandparents were at the Mayo Clinic in Rochester; grandpa undergoing medical tests.

I don't know what's in the future for this girl and her sixteen year old sister. All I know is, I feel compelled to help out any way I can.

Boredom is not the same as having too much time on our hands. Its root goes much deeper...to what (can be described as) a failure to find the world and each other compelling or interesting. We find the world boring because we don't see very clearly why it is valuable and good or how and why we practically and beneficially belong to it. We are bored with ourselves because we don't think that what we do really matters much or is of life-giving interest to others. And so we become disengaged from each other, wandering about in a fog of diminished hopes and expectations. Not knowing what to do, and having become suspicious of what our society encourages us to do, we sit around, hoping to find some inspiration. What we have here are the ideal conditions for the entertainment industry to pump us up with artificial stimulation, excitement, and false hope...

If we remember that delight is made possible by our loving and deep affirmation and embrace of others..., then it is easier to see how our desire to possess or be entertained by others works against our joy in them...

-Norman Wirzba, Living The Sabbath: Discovering the Rhythms of Rest and Delight

I realize my lack of posting lately may be due to being preoccupied with worldly matters and not taking the time to experience the delight that daily life has to offer. But without this sense of delight, we are the dead walking. Stay tuned for a renewed and refreshed sense of delight and wonder!!!!
at 6:35 PM 4 comments:

Email ThisBlogThis!Share to TwitterShare to FacebookShare to Pinterest
Labels: a peek into my subconscious, quotes, thinking out loud, What was I thinking?

we 'r Siamese, if you please 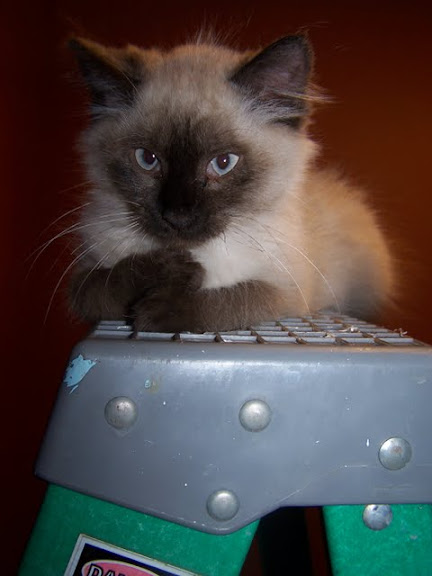 This may just be the cutest kitteh ever. Really.

I have always had a thing for Siamese cats. Even when I was not yet four years old, I guess I fell in love with a friend's Siamese and announced to my parents that I wanted a Siamese cat for my fourth birthday. Amazingly they obliged with Mittens, my first ever seal point Siamese. I was hooked.

We have a strange cat gene pool around here. There are a few outdoor cats that somehow showed up, and every year we get a few kittens. We have had a few blue eyed Siamese mixes over the years, including Puffball, a grey Siamese who died suddenly of a blood clot, and Boofy (a.k.a. Blue Flame), a flame point Siamese with the bluest eyes ever. He insists on sleeping with me every night.

But this year there was one litter, from a nondescript black and gray tabby, that included this very Siamese looking kitten. We brought it inside to protect it when it reached the exploring age. Our dog Togo would have had it for a plaything otherwise. We kept it in the rabbit cage for a while, to protect it from Sally and the adult indoor cats.

Originally, we were going to give this kitten to a friend of Starflower's. But as we cared for it, we somehow came to the decision we could not part with it. So Frisky, the Friskinator, whatever you want to call it, is our newest house kitty. Like we needed another one. But like I said, I have a thing for Siamese.
at 8:37 PM 6 comments:

Email ThisBlogThis!Share to TwitterShare to FacebookShare to Pinterest
Labels: cats

Welcome to the House of Color

I have spent my last 3 days priming and painting walls during one of Minnesota's rare hot and humid spells. I can't believe how much work it's been, and I can't believe I've done so much and how the house looks so different inside. But I'm done now, so I can sit back and enjoy the results. 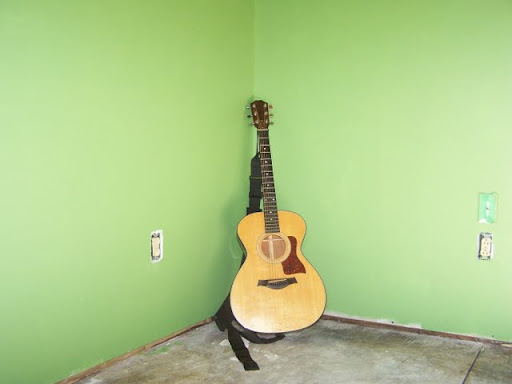 This is the master bedroom, painted entirely in Budding Fern. Why so green? Because for six months of the year in Minnesota we don't see any green outside, so in January this will look really nice.
(The Taylor 512, sweetest sounding guitar ever, at least to me, is placed there just for effect.) 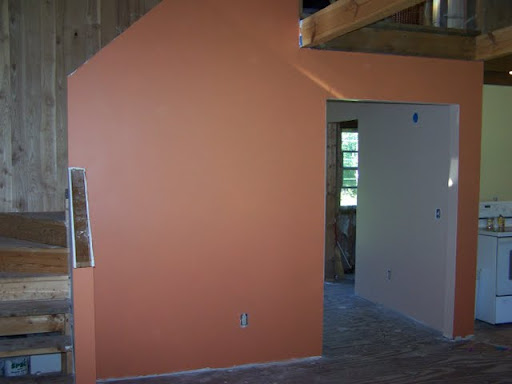 Here we have the monolith stair wall painted in Earthenware Orange. A daring color for someone like me, but I like it, and believe it or not it is a neutral color. I can't imagine any color that would not look good with that as a background. I plan to use a lot of blue accents in the great room for contrast. In the back hallway you can see a dark version of Peach Beach, which we used there and in the entry way. I could not get a good picture of the color in the light. In the kitchen you can see Lemon Balm, which again, I could not get a good picture of.

It was a long job, but I found I actually enjoy painting. Next job is the flooring, which will probably have to wait until next payday. Enough time for me to recover.
at 6:04 PM 10 comments: