I am still dealing with the fact that my post about the basketball game is approaching 5,000 page views. I certainly did not think that what I wrote for myself, intended to share with a few friends, would reach that far. It made me nervous, in fact. I was editing the original post while I waited in line at JC Penneys to buy my son a suit for the funeral. I am nervous that so many people have read what was a heartfelt reaction to the untimely death of a friend, teammate, and classmate of my son. I hope I said everything right. I know I didn't, and there are places where I could have done better. I am sorry for that.

Healing has begun here. It can't ever get back to normal, but we're adjusting. Basketball season is over. It was heartbreaking, going to every game. But now there is baseball to look forward to.

There but for the grace of God go I. But where is the grace when a young man is gone? I don't know, and I guess I never will.
at 7:19 PM 4 comments:

The East Central Eagles host the Moose Lake/Willow River Rebels tonight at approximately 7:15. This will be the first home game without #24, Colton. Here is a link to the live stream; you can create an account or sign in with Facebook.

Email ThisBlogThis!Share to TwitterShare to FacebookShare to Pinterest
Labels: community

No one is ever ready for this

Our community lost a good kid this week.

On Tuesday morning, Nina came into our room in tears. She said, "Something really bad happened last night. Colton Nelson was killed in a car accident."

Words to immediately stop normal life. Nothing, from this point out, will be normal. Shock. Pain. Grief. It is all there. Even if you did not know the kid. But I did.

He was Homecoming king. Played football, basketball, golf. (I'll forgive him for the last one. We could have used him in baseball.) Vinny grew up with him, went to school with him since kindergarten, and was a basketball teammate. I didn't know how close they were, but it turns out Colton was the kind of kid who had many friends. I don't know anyone who didn't like him.

We are a small school. Vinny's graduating class is around 30 something, although most younger classes have more students. But we are small enough, this news hit like a tidal wave. Everyone in the school knew Colton. And, everyone liked him. There was nothing not to like. He was a good person with a bright future. So why???

I don't know. But our small school community has an amazing ability to pull together. I saw it in a basketball game last night.

There was a basketball game scheduled against Pine City the day the news came out. That game will be played on Saturday. There was another game scheduled last night in Ogilvie. This game was nothing short of amazing.

To give some perspective, East Central (our team) is in the middle of the conference standings. We have lost some games we shouldn't have, and except for a couple matches, our losses have been close, well fought out games. My son Vinny has shown amazing ability as a 6'5 center. (shameless parent bragging) On the other hand, Ogilvie is a team that does its best with what it has. The town, population 369, is on the crossroads of Minnesota highways 23 and 47, on the way to somewhere but not quite there. They have the shortest outfield fences of any I have ever seen. And, they have a new basketball coach, and a team that lacks experience. Nevertheless, in their first match against East Central, they won by 4 points, but key EC players (including my son) were out sick.

Last night, though, was destined to be different. I don't know how many people from East Central showed up, but it was probably about 200. Ogilvie had about 75 including the pep band, which played in tune and was small but good.

There was a moment of silence before the National Anthem. Appropriate.

We (actually Vinny, center) got the tip off, and Traivon scored within three seconds. That set the tone. Although, the gym was kind of quiet during that first half. I think it took time for East Central fans to get out of a grieving mode, into a cheering mode.

We stood up when our score reached 24. That was Colton's number.

I actually felt kind of bad for Ogilvie. Here we were, claiming this game for Colton, and they had to deal with the fact that they could not compete with the spirit that drove our team that night. Nevertheless, they presented our team with a sign, signed by every student, expressing their condolences. Ogilvie now rates in my mind as the classiest other school in our conference.

The East Central Eagles played like I have never seen them before. They had a purpose, and an energy. This season they have struggled with internal things, like most teams; players have quit, and others have had issues. But last night it seems they forgot all that. They played for the joy of playing, for the first time I have seen all season. They played for Colton. And Colton was there, the sixth Eagle on the court.


East Central ended up winning, 73-35. Vinny scored 14 points, if I did not lose count. Usually after the end of a high school ballgame, the crowd disperses quickly. But, while the Ogilvie fans filed out, no one from East Central was ready to leave. 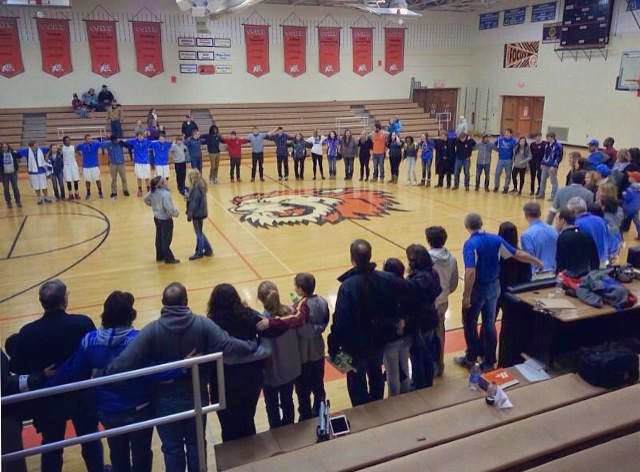 We formed a large prayer circle. A student, accompanied by Hana, Colton's girlfriend, led us in prayer. It was perhaps one of the most profound, beautiful, tragic things I have ever experienced.

The energy at that basketball game moved me. It took a tragedy to get that going, but yet it was there. Somehow, I believe in people.

The power of frozen water 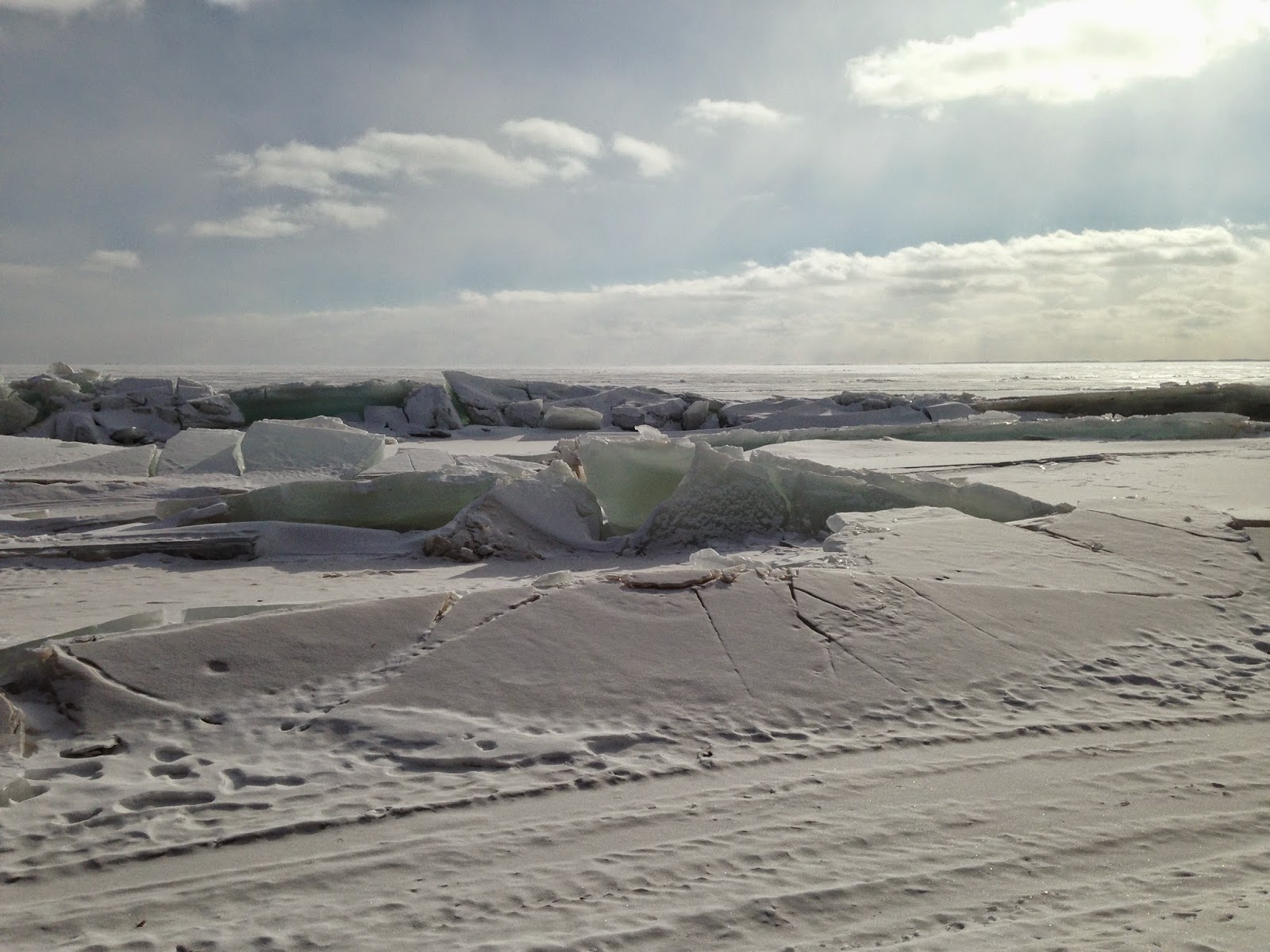 I had the opportunity to drive to Brainerd, MN for a fascinating meeting on the progress of research on our "Sentinel Lakes". The Minnesota Department of Natural Resources, along with the MN Pollution Control Agency and the US Geological Service, among others, have partnered to do unprecedented intensive research on selected lakes across the state, to quantify the effects of land use and climate change. It's really amazing, and too much for this post, to summarize the work that has been done on these lakes, and the implications. I am proud to have been a part of this project since the beginning.

I always like to take the scenic route when I have the time. So on Wednesday, after the meeting ended at noon I took the northern route around Mille Lacs, instead of the southern/casino/bigger traffic route. This pressure ridge was present along the entire northeast side of the lake. Pressure ridges are formed when the volume of ice formed is constrained by the physical form, of the lake. Ice expands, when there is nowhere for it to go, this happens. And it is beautiful.

In the words of Eric Krenz, one of my favorite blogging friends, "That would have been one of Earth's ~greatest~sounds." I agree.
at 5:27 PM 2 comments: