It was a great year for tomatillos in the garden. Above average year for everything, really, but the tomatillos outdid themselves. I planted four plants I bought from the garden center, but a few weeks after planting time I noticed a volunteer tomatillo or two among the cabbages. That's one good/bad thing about tomatillos; onnce you plant them, they will spring up everywhere the next year.

Tomatillos seem to have one purpose in life: salsa verde. This uniquely sweet, tangy salsa goes well with just about any white meat, eggs, or of course, tortilla chips. I used to make salsa verde by cooking the tomatillos in water, then pouring off some of the water, adding the rest of the ingredients, and whirling the whole thing in a blender. This made an acceptable salsa, but I think some of the flavor was compromised by adding water and pouring it off. So this year I decided to try something different: roasting.

Tomatillos are not as squishy as their ripe red tomato cousins, but their cells, like those of all living things, are made up of a high percentage of water. By roasting the tomatillos in the oven, the excess liquid cooks off, and some of the sugars start to caramelize, making for a unique, rich flavor.

I did some searching for a recipe for roasted salsa verde, but all of the recipes I came up with were for small quantities of tomatillos, not the full grocery bags I hauled in from the garden before the first hard freeze. I'm more of an improvisational cook anyway, so what I have here is a "guideline" recipe that can be adjusted for quantity and taste. One exception: for canning, you want to be sure the acidity is high enough, especially if you're doing a boiling water bath. I add one cup of vinegar per four pounds tomatillos.

Tomatillos, however many you have
Chopped onions, about a 1:4 ratio to the tomatillos
Hot peppers to taste
Garlic, to taste
Salt (use your judgment)
Vinegar (white distilled or apple cider, whatever you have on hand, or lime juice, which tastes pretty good in fresh salsa)
Cilantro, chopped, to taste 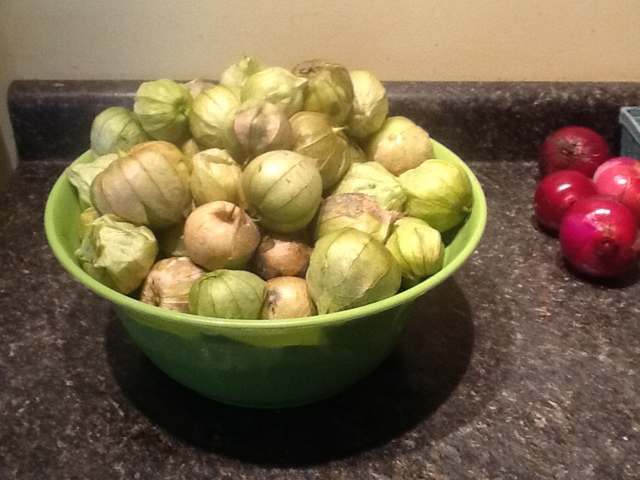 First, husk the tomatillos and wash away any dirt. If you have about three times this amount of tomatillos, as I did, I recommend putting some good music on and pouring a glass of something. This will take a while. And your fingers will get sticky.

Cut tomatillos in half; on the bigger ones, cut out the stem. Place on a roasting pan that has been drizzled with olive oil. 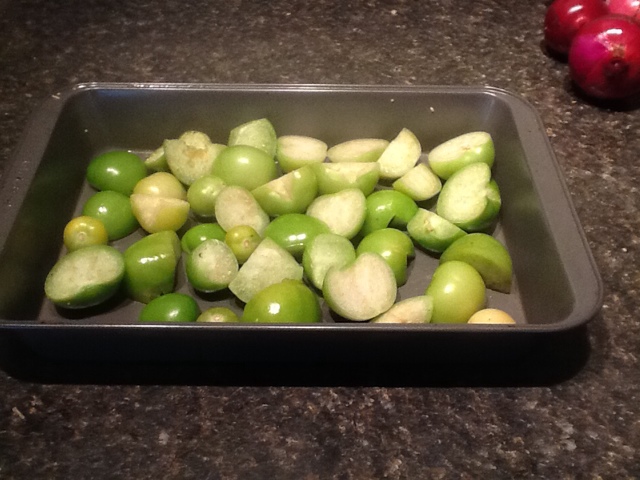 Roast at about 400 degrees, until some liquid is cooked off and the tomatillos start to turn brown in spots. You want some liquid left; shoot for something like this: 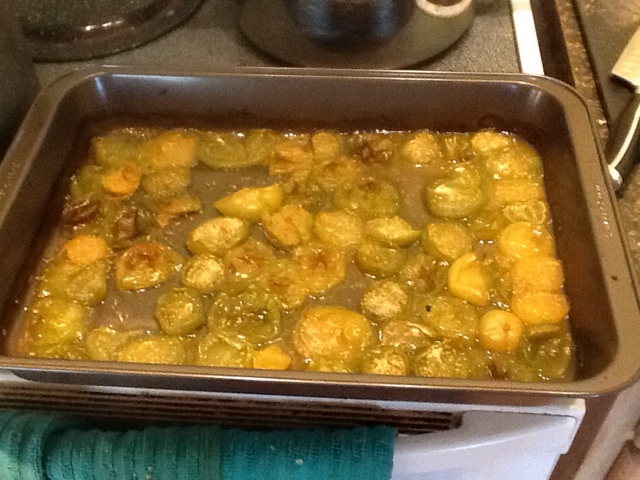 Pour into a Dutch oven or stock pot. Add the rest of the ingredients, tasting often and cleansing your palate with a good IPA. for this batch I used some assorted hot peppers that were given to me by a friend; my hot peppers didn't do so well this year. 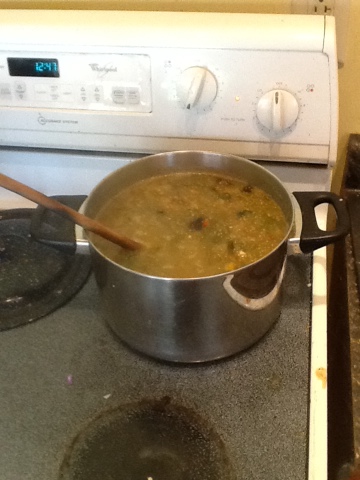 Simmer for a while on low- medium heat. I suppose at this point if you want a smoother salsa with no skins you could run it through a food mill. I'm too lazy to do that.

At this point, it's time to can it. You can use either the boiling water or pressure method. Since my old boiling water bath canner sprung a leak, I will pressure can this batch. 15 minutes at 10 lbs, otherwise 40 minutes boiling. Some recipes call for adding a tablespoon of lemon juice per pint for acidity; since I add vinegar earlier this is not necessary.
at 10:49 AM 1 comment: