About that other trout stream... 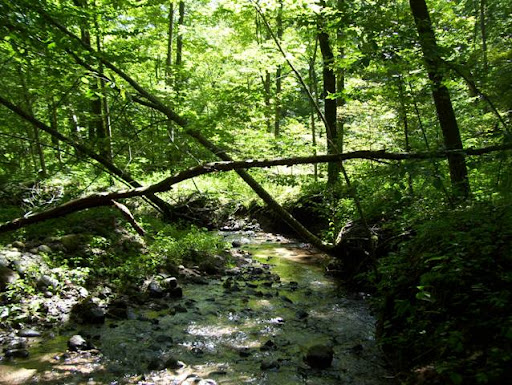 If you recall, last week I gave a little teaser about sampling a trout stream along the St. Croix. We made it there on Thursday, and it was NOTHING like that meadow-meandering stream I wrote about last week. This stream was nothing short of mystical.

If you're looking for it from the river, all I can tell you is good luck. We could hardly find the mouth; it was a narrow flowage barely visible in the grass. But once you get out of the river plain and start walking into the woods, this stream takes on a life of its own. It rushes over rocks and sand, twisting and turning through floodplain forest. As soon as we took the first turn into the woods, armed with backpack electrofisher, my coworker and I found our first brook trout.

A bit about electrofishing...it is the accepted way to sample small streams. The fish are stunned by an electrical current, but not enough to kill them. They are netted, usually put into a bucket, and when there are a good number of fish we stop sampling to measure them, take scale samples (to determine ages), and release them. Of course, it is more effective than rod and reel fishing, which is probably why I hardly fish any more. The action is just too slow. :)

Back to this small stream...as it wound its way up the St. Croix bluffs, we shocked up brook trout after brook trout, and hardly anything else. There were hardly any pools more than a foot deep, but still they were there in the cool spring water. Most of them were small, averaging about 4 inches, but we did get a couple 8 inchers. We ended up with over a hundred brook trout, from the mouth of the stream to where the water got too shallow to find any more.

Brook trout amaze me. They survive in the smallest of streams, as long as water temperatures are right. They are beautiful fish.
at 9:59 PM 6 comments:

Email ThisBlogThis!Share to TwitterShare to FacebookShare to Pinterest
Labels: brook trout, my job

morning in the garden 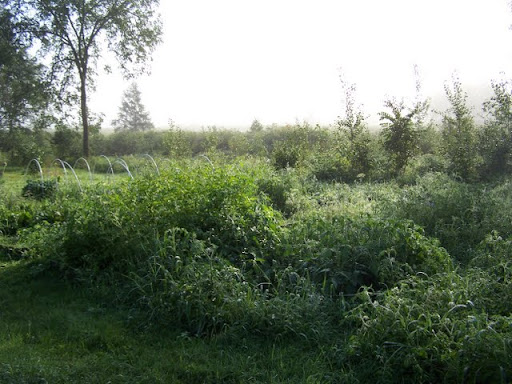 I can't decide if this looks like a garden, or like all the other neglected areas of our yard. But believe me, a bountiful harvest lies within. The sun was breaking through the morning mist. 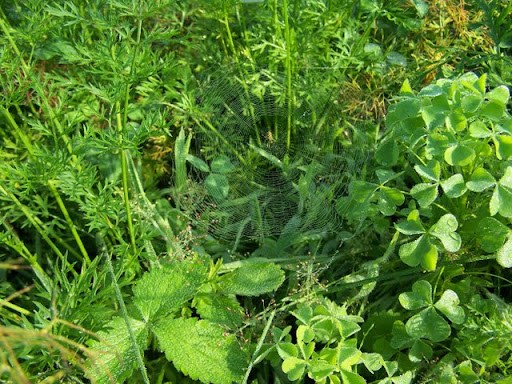 The jeweled orbs of web weavers were everywhere. 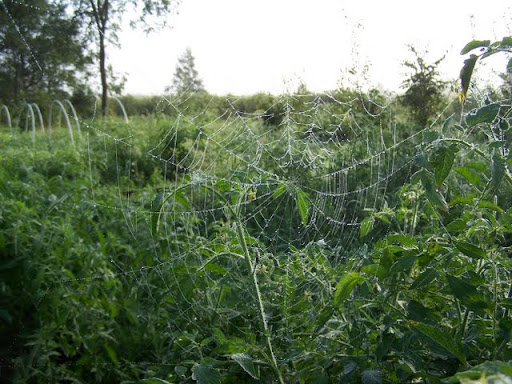 My tomato plants have been going absolutely crazy in the combination of abundant rain and high temperatures. I have not had to water the garden since I planted it. And for the first time in years, we have not had frost in June, July, or the first half of August! But still I have been impatient for RIPE tomatoes. Yesterday I found the first blush of red among the Stupice tomatoes. It's the beginning of a wonderful, crazy barrage I hope! 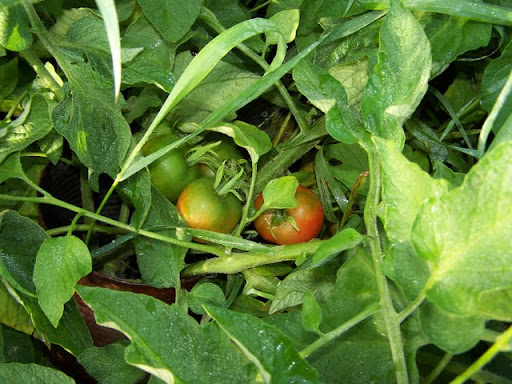 And my winter squash long outgrew the confines of their 4 x 8 bed. Vines are sprawling everywhere, and it appears as though I will have an abundance of several varieties. Including one pumpkin! This beauty is already the size of a basketball. I have never successfully grown a pumpkin before. 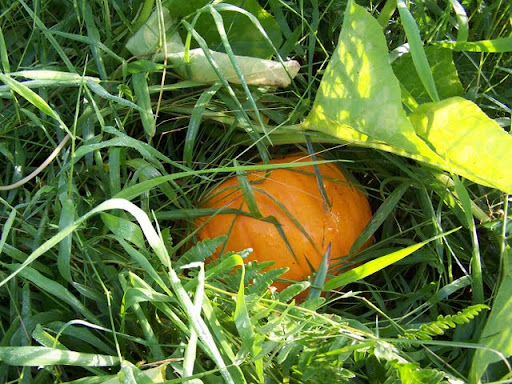 I have been picking green beans every few days, canned eight pints of dilly bean pickles, and froze about eight quarts of beans. I picked two more buckets of beans today, but the harvest may be winding down. That, and a deer has been eating the leaves.

I harvested onions this morning, and was kicking myself for buying the cheap onion sets at the grocery store instead of the tried and true starts from Territorial Seeds. The white onions did okay, not spectacular, but I didn't get any red onions bigger than a golf ball. Half of them flowered, and that means the plants put their energy into flowers, not bulbs.

Garlic did as well as ever, although I almost waited too long to harvest it; the bulbs were already starting to separate. I have not spent money on garlic, for eating or planting, in several years now.

Cucumbers and watermelons have had a slow start, but I may be on track for a record watermelon harvest this year. Just one sweet, juicy melon would be worth it!

Today is a cool day, with the high only around 70, and lows in the 40's predicted. It's supposed to be windy, so I don't need to worry about frost yet...I hope.

UPDATE: A second look reveals that I have TWO pumpkins, as well as some Guatemalan Blue squash!
at 2:23 PM 3 comments: 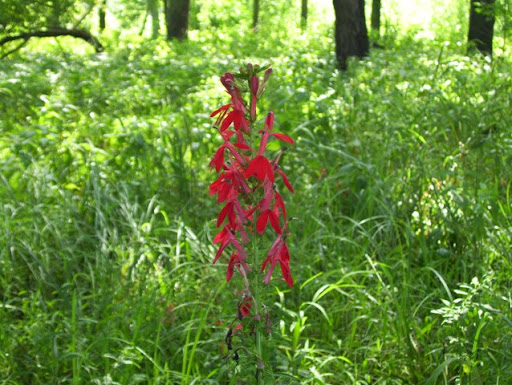 I had another fish-seeking adventure at work today. The destination was a small, unnamed tributary to the St. Croix River that I first blogged about nearly four years ago. I can't believe it's been that long already. If you were following me at that time, you may recall that this stream had been dammed by beavers and was quite difficult to walk. This year it did not appear to have any active beaver dams, although remnant logs were scattered here and there and the stream was still challenging, especially on a humid 85 degree day. We only caught two trout by electrofishing, one of which may have been young-of-year, but several others were missed in the dense overhanging vegetation and swift current of this cold, clear stream.

I was at this stream about a month earlier than the last time, and there were more species of flowers in bloom along the stream and river banks than I remembered. Ironweed, blue gentian, Joe-Pye weed, goldenrod, and cardinal flower, which I have not seen any further north along the St. Croix River than this area. I took this picture on an island where we paused for lunch before walking the stream.

Tomorrow I am headed back to the river to sample another small brook trout stream just north of the Osceola landing. I am told that one is much easier to walk, and much more scenic, than this one was. I'll bring the camera!
at 4:04 PM 6 comments: 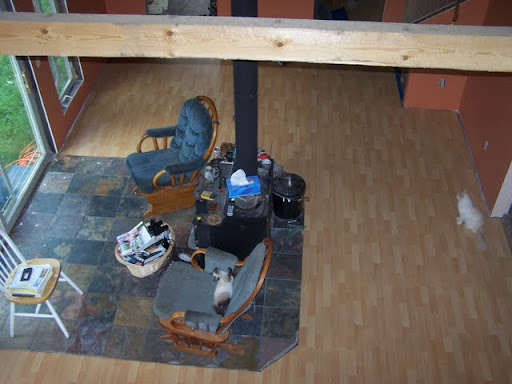 (the view from Starflower's room; notice one very relaxed kitten in my rocker, and one perplexed looking flame point Siamese checking out the new floor)

Things are really coming together in the house now. I spent the weekend installing a laminate floor in the great room, to cover up the bare weathered plywood we have been living with for so long. I think it sets off the colors in the slate hearth nicely. I will be doing the same slate in the entry way some time soon. 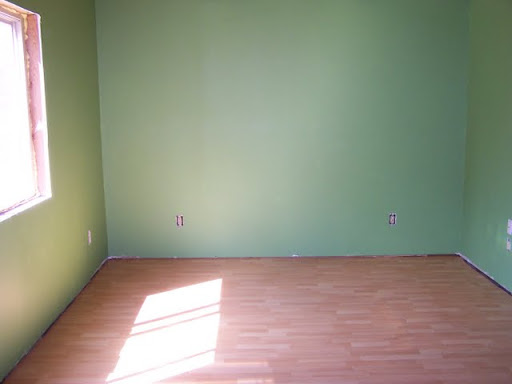 This is the same flooring that I installed in the master bedroom last Sunday. Installation in both rooms went amazingly well. The hardest part was starting out, figuring out how to stagger 51 inch whole boards with cut pieces to span the length of the room. Once I worked out a scheme, The Hermit ran the table saw cutting boards to my specifications. I have found it's always dicey doing home improvement projects with a spouse, but we managed to work together somehow.

In other matters, I picked two ice cream pails full of green beans tonight, and I have three heads of broccoli ready to cut. Garlic is ready to harvest when I have the time, and if all goes well I will be in tomato heaven starting in about three weeks.
at 6:50 PM 10 comments: