"an extratropical cyclone of rare intensity"

We Minnesotans like to talk about the weather. At my workplace there is often an undeclared competition over who had the lowest overnight temperature, or the most rain in the rain gauge. But don’t think for a moment that we would dare call two days of gusty winds, heavy rain, and even snow by a name as exotic as “cyclone”. We get blizzards here, not hurricanes. This enhanced satellite picture, taken at about 4:30 Tuesday afternoon, sure looks like a hurricane, though! And I was just south of the eye.

I had been hearing since Monday that rain and heavy winds were expected starting Tuesday. The Hermit spent the day bringing wood in the house and putting tarps over outdoor wood piles. The rain began Tuesday morning, and all afternoon I had the strange sensation that my sinuses were about to explode. This was due to the record low air pressure that was making its way across northern Minnesota. By afternoon the wind was starting to pick up.

Starflower and I had play practice in the evening, and indoors we could hear the wind blasting the upper level of the auditorium as the rain pounded the roof. Meanwhile, out on the football field, our high school’s team was battling the extreme conditions and came out with a 48-0 victory in their first playoff game. Go Eagles!

Our drive home was interrupted by a large spruce that had fallen and was blocking the road. It had to be a good two feet in diameter at the base. I had to take a three mile detour, all the while thinking about trees, wind, and power lines. I was happy to see the lights still on at my house when I finally pulled into the driveway.

The rain fell late into the night, occasionally driven like nails drumming on the steel roof. I found out the highest wind gusts were over 40 miles per hour here, and may have even hit fifty. However, the strong frame of the house barely shook. Some time over night the rain turned into sleet, then snow, and I woke to an inch or two covering the ground, and still coming down. When I looked out at the rain gauge in the morning I could tell there was already more than two inches of rain.

By the time the rain stopped Wednesday afternoon, there was five inches in the rain gauge. I found out on the National Weather Service Web site that Askov, the town where the spruce fell, had the highest total precipitation for the storm, at 4.94 inches. 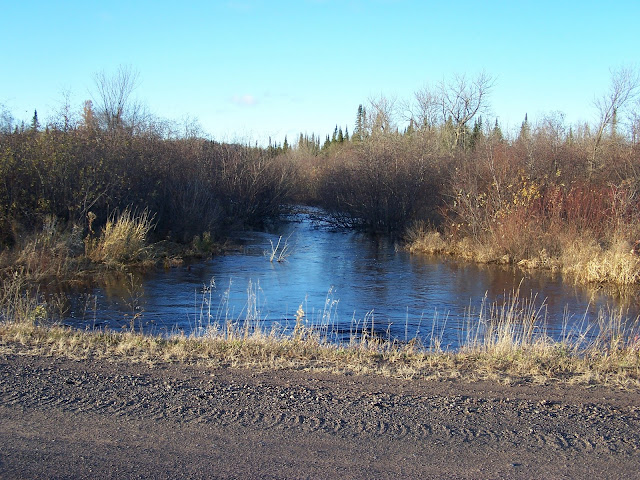 The Kettle River and all the local creeks were swollen like I'd never seen them before. Not even in the spring has the water ever been this high on Sand Creek since I've lived here. This photo, a mile upstream from my house was taken yesterday, after the water had gone down a bit. 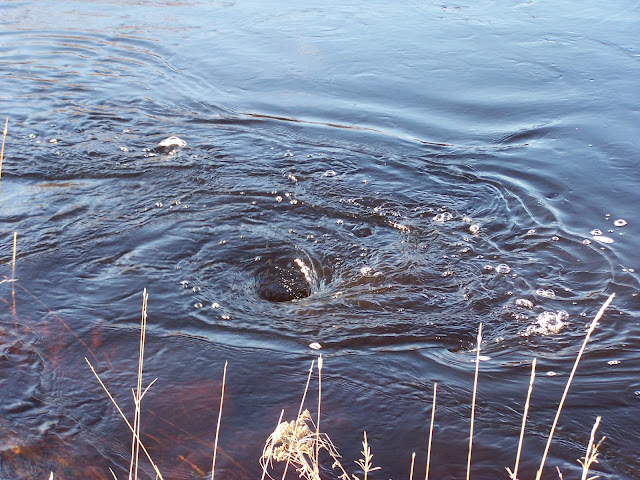 The water was so high the three 3-foot culverts under the road were completely submerged. The flow created vortexes like this one on the upstream side at each culvert. One dead end road to the east of my house was completely under water. 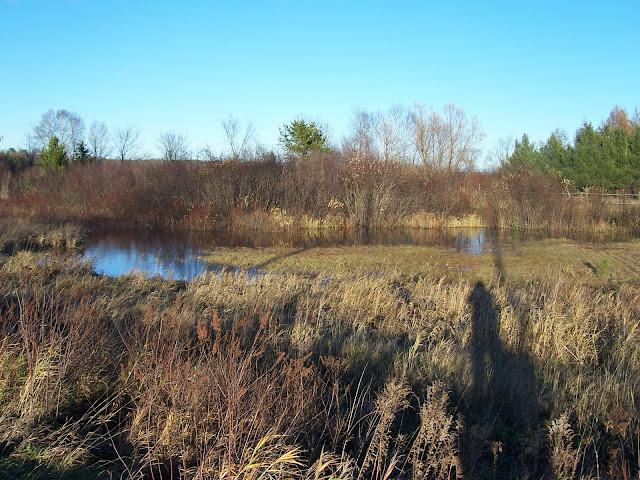 And I have a new pond, for now! The water had already gone down quite a bit when I took this photo yesterday. Needless to say, Sally's Pond is as full as it gets, but it was already in the shadows and I could not get a good photo of it.

The good news is, we did not lose any of our large white pines in the wind, and the house is still high and dry. A cyclone in Minnesota...What will they think of next?
at 12:25 PM 7 comments:

Email ThisBlogThis!Share to TwitterShare to FacebookShare to Pinterest
Labels: weather

Well! It's about time for an update! 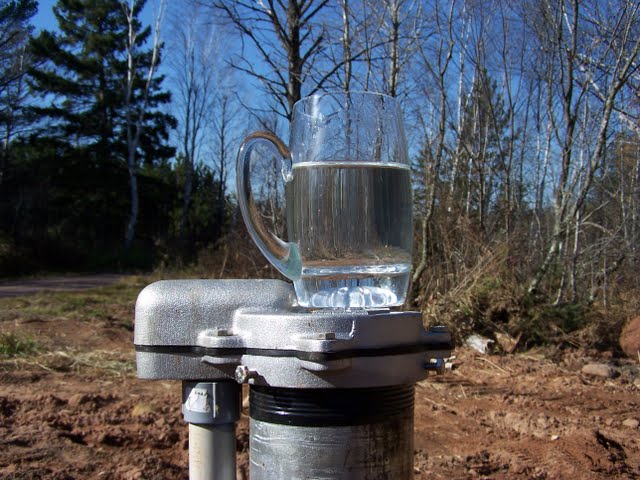 Has it really been over two weeks since my last post? Life has been THAT busy. Between the normal work busy-ness, Calvin's football games, Starflower's volleyball games, Mr. Attitude's piano lessons, play rehearsals that sometimes last until 10 pm, and a weekend trip to Nebraska, I have hardly had time to breathe. But for me, that's a good thing. Sometimes I have a tendency to get mired in stillness and reflection. In a month, after the final curtain call, I will have more than enough time to sit in front of the wood stove and contemplate life. Hopefully I'll have the energy at night to pick up a musical instrument and do what I love.

We had a wonderful, if all too short, trip to Lincoln, Nebraska for my stepdaughter Sarah's wedding two weeks ago. It was fun to be "on the road again", fun to see my extended family all there, and fun to have a reason to get dressed up and curl my hair! Lincoln seems like a nice city, and I hope to visit there again when I have more time to see the area.

When we returned home all road weary at 9 pm that Sunday, I went out to the well to get a jug of drinking water. When I turned on the faucet, nothing happened. No water, no pump turning on, nothing. The Hermit and I drove that shallow sand point well by ourselves about fifteen years ago when this place was just our weekend getaway. It originally had a hand pump, but when we moved here nearly eight years ago we installed an electric pump and pressure tank, which were run by generator power until we got electricity. The well had given us years of reliable, clear water, but in the last couple of weeks something had changed. The pump would no longer hold its prime, and the water had sediment in it. I don't know exactly what happened, but it was a bit disconcerting, to say the least, to suddenly be without a source of water.

Our plan had always been to drive a new shallow well in the 8 x 8 basement in the house. The Hermit and a neighbor worked on it this summer without success; funny how water can be about 12 feet down by the cabin, but not by the house 200 feet away. But I think The Hermit shares my feelings of having had enough of this do-it-yourself-ness. We wanted water, and we wanted it now. So we borrowed some money from my dad, and had a well professionally drilled. With the economy as it is, the guy was available to come out and drill just two days after we called, on a Friday, and the water line to the house was completed the following Monday. We now have running water in the house, even if it is only a hose with a valve on the end. It makes all the difference!

It turns out we are sitting on a dream of an aquifer. Just 37 feet below the surface, in sandstone bedrock, the water flows at over 40 gallons per minute. If we lived just a mile to the south or east, across the Douglas Fault, the bedrock would be basalt and water would perhaps be much further down. There are no sources of pollution that I know of in our watershed, and the water is crystal clear.

I can't wait to get the plumbing finished, and water heater up and running! No more hillbilly showers! 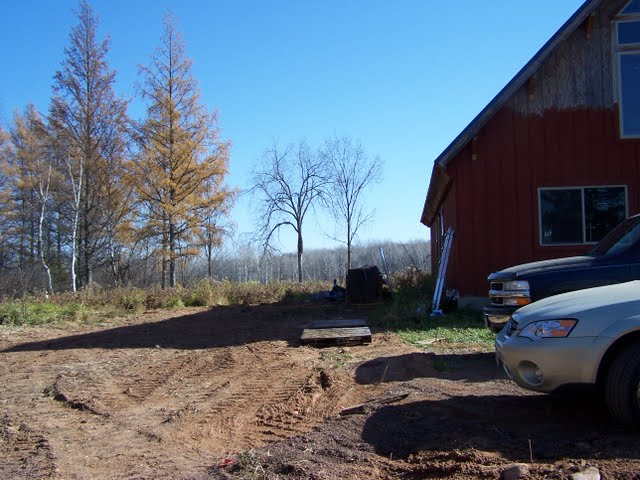 When the guy came with the backhoe to dig the water line to the house, he smoothed out a lot of the back yard. Starflower is contemplating a regulation-sized volleyball court there next summer. I'm all for it; from what I saw in her games, she has a lot of potential as a player. Her middle school team consisted of all sixth graders with little or no experience, yet they held their own and even won a few matches. 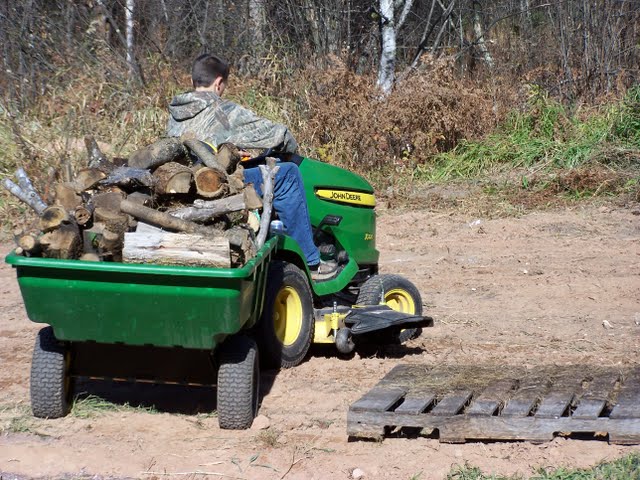 Here's Calvin, who is now officially as tall as me (5'7). He lives for football and pep band (and X box). He will be traveling to New York City in March for the St. Patrick's Day parade--our small town marching band was selected, the first band from Minnesota in many years! But today he was doing a necessary chore, hauling wood from the big pile out front to the house. We had our first fire in the wood stove a week ago, and while the fall has been mild, I know cold weather will come soon.

I have survived the first month of rehearsals for "Hello, Dolly!" It has been a lot more fun than I expected, mainly because of the people involved. I have made new friends and reconnected with a couple old friends. I have a new appreciation for all of the work that goes into a theatrical production. My favorite part is singing; just the other night I was very tired and not wanting to go to rehearsal, but after a few minutes of singing I found a new energy, and I was hitting all the high notes and getting into the whole stage character thing. But, for the time commitment reason, I won't be sad when it's over.

So there you have it. I didn't get to certain things, like my garden harvest, but I have the next two days free, so...
at 4:44 PM 6 comments:

I could write about the wonderful fall colors that are quickly disappearing. I could even take some photos. I could write about the beautiful weather we're having, how we've gone nearly two weeks without rain (which, by the way, is a good thing). I could write about the multitude of green tomatoes I harvested nearly two weeks ago before the first big frost hit, which have been sitting on a table top in the entry way and have now suddenly decided to ripen, the day before we leave for Nebraska to attend The Hermit's daughter's wedding. That's right, I'm actually crossing state lines, and not just a quick foray into Wisconsin, which doesn't really count. I don't remember the last time I have been so far from home!

But, speaking of tomatoes, I wanted to share a culinary discovery I made last night. Of course I most likely did not discover it, there are probably a million recipes out there on the Internet, but I thought it was pretty cool. As I was preparing our baseball playoff celebratory meal (Go Twins!) of hot dogs, I suddenly realized we were almost OUT OF KETCHUP! Surrounded by ripe tomatoes, but no ketchup! I can stand a hot dog with mustard only, but when you're watching baseball it just ain't right.

While I was weighing the options, the least appealing of which was driving ten miles to the store, I recalled that I usually keep a small can of tomato paste in the pantry. Hmmm....What is ketchup, but tomato paste plus a few other flavorings? Using the ingredient list from the near-empty bottle of Annie's organic ketchup as my guide, I started mixing. A little vinegar here, a little Worcestershire sauce there, onion powder...Voila! Ketchup! I don't have an exact recipe to share, but those are the essential ingredients. Most commercial ketchups contain a lot more sugar or high fructose corn syrup than they actually need; I added a tiny pinch of sugar but it would have been fine without.

I don't have a laptop so I won't be blogging from the road, but maybe I'll have some time to compose some rough drafts with pen and paper. Have a great weekend!
at 8:37 AM 3 comments: