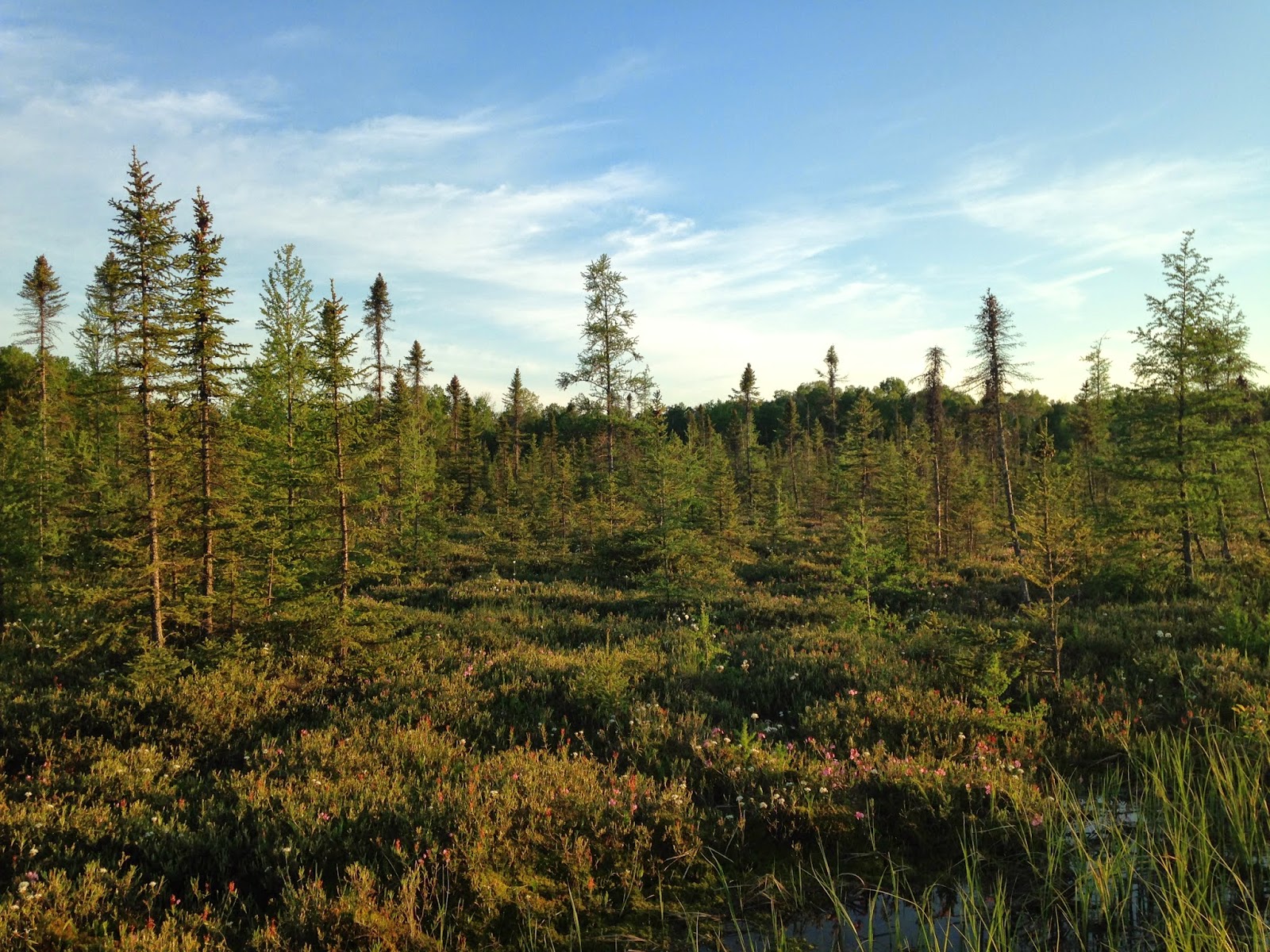 Bog laurel (Kalmia polifolia) and Labrador tea (Ledum groenlandicum) in bloom.
at 9:51 AM No comments:

Email ThisBlogThis!Share to TwitterShare to FacebookShare to Pinterest
Labels: around sand creek, photography

The Unintentional Mud Run, or How To Bond With Your Daughter (and get a new iPhone in the process) 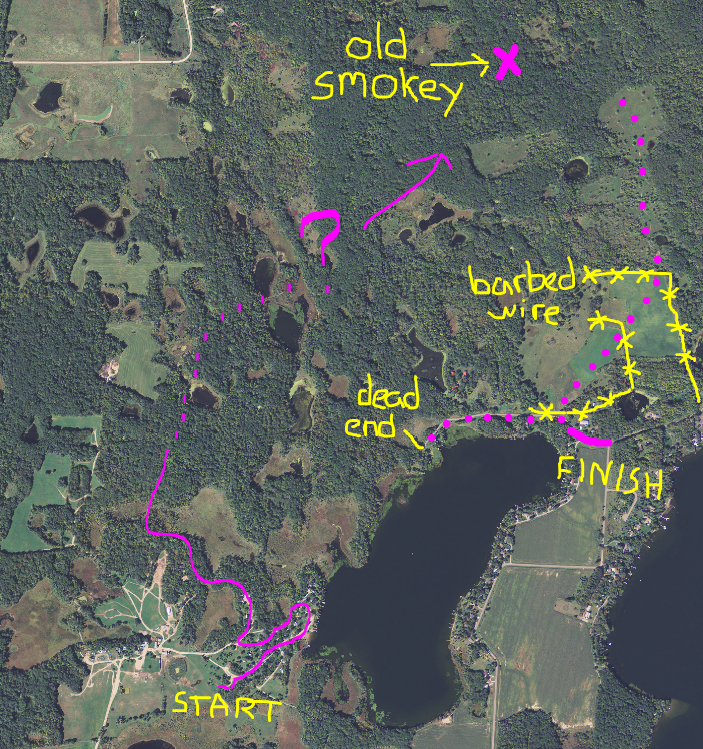 I went for a run with my daughter last Saturday morning. We were camping at El Rancho Manana for our fifth Homegrown Kickoff Bluegrass Festival. El Rancho Manana is a beautiful campground located in some rolling terrain just west of St. Cloud, Minnesota. It has the only access to Long Lake, a beautiful little lake with some nice bass and sunfish.

We started out about 7 AM on Saturday morning. It had rained the night before, so much that Nina and I had canceled our plans to see a band at 10 pm on the main stage. So I knew trails would be kind of muddy. And, it looked like rain was threatening again. So I slipped my iPhone (3GS, old model) into a Ziploc bag in my fanny pack. I was going to use Map My Run to track our mileage, and I wanted to be able to access my phone, so I did not seal the bag.

Then it started raining. At first I thought, how exhilarating to be running in the rain! In the pouring rain! And, this trail will turn back to the campground soon...

Then the trail started going uphill, and it was washed out in places from previous heavy rains. Kind of hard to run, but oh well.

Then the trail led through piles of saturated horse manure, way out in the woods. Not so fun. I began to question my navigating, but it was still raining, and I did not want to get my phone wet!!! (Irony to follow!)

Then the trail alternated between bogs and uphill runs. It seemed like the trail was going uphill forever. I kept waiting to hear Ms. Map My Run tell me we had gone one more mile, but she seemed strangely silent. Then we passed a sign: "Old Smokey, Highest Point in Stearns County". No wonder it seemed I was running uphill so much. I think it was about 1460 feet, about 200 feet above our camp site.

I was starting to hear some mutterings from Nina. Some curse words maybe. I was feeling kind of uneasy myself, but if life has taught me one thing, it is this: Just keep swimming!

We came to an open pasture, with a faint trail across it. It had stopped raining, so I decided to pull out my phone to see where the hell we were. Because I was pretty unsure at that point. I thought surely we would have circled back to the campground by then.

When I pulled out my phone, I realized I had not sealed the bag, and there was water around the phone. So much, that I could see water creeping underneath the screen. Crap.

We crossed the pasture because it was easy running/walking, much easier than washed out hillside trails and bogs. Nina was still muttering curse words, and I was starting to think of a few myself.

Then we came to a sturdy barbed wire fence, with a gate we were not meant to open. I hate to stereotype, but this fence must have been built by a German immigrant farmer, it was so solid and meticulous. The family dog could not have found a way under this fence. But at that point I saw water, and a house next to some water. So I commanded that we find a way under the fence, towards civilization. We crawled under the fence where a tree had fallen on it, and slogged across the open field and some low lying, waterlogged meadows. We reached another fence, and another, and crawled under them. Finally we reached a road. Big Fish Lake Road.

I had read enough maps to know that Big Fish Lake was one lake over from the campground. For a moment, I thought the lake whose waters we could see was Big Fish Lake, and we had gone a whole land section off course.

We started down Big Fish Lake Road, with the intention of finding an occupied cabin, knocking on the door, sheepishly explaining our situation, and asking for a ride back to the camp ground. By this point I was sure Nina would not be speaking to me for, well, a couple weeks minimum.  But, as luck would have it, we came to a dead end. Which, it turns out, was tantalizingly close to the camp ground. But we did not know if we waded along shore, we would be back to camp in ten minutes. So we turned around up the road. We walked to the first road junction. There was an SUV approaching, towing a pontoon trailer. I flagged it down, and luckily it was a nice guy about my age. I explained our situation, and he gave us a ride back to the camp ground.

All in all, we went a little over 4 miles. When we finally arrived, soaking wet, back at our camp site, Nina and I said little to each other. Then we drove to St. Cloud, where I upgraded to an iPhone 5C. I was long overdue for an upgrade, and I think at that point I had earned it.

I had not ever really had the experience of feeling lost. I usually have a good sense of direction, but on these winding trails in the pouring rain, I had lost it. I think Nina was genuinely scared at some point, but I always knew we could not get so far lost we could not find our way back. And by the way, she kicked my ass running. She can do an eight minute mile, while I still struggle to do an eleven. I think we both learned something about ourselves that day. And we can laugh now!

Email ThisBlogThis!Share to TwitterShare to FacebookShare to Pinterest
Labels: exercise, What was I thinking?
Newer Posts Older Posts Home
Subscribe to: Posts (Atom)