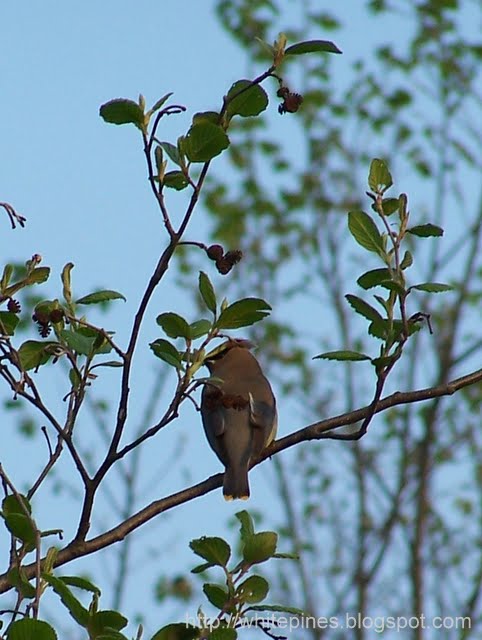 Seen while fishing a secret spot this evening with a favorite fishing buddy (Joe). No fish, just tangled lines and a few nibbles. And a few good birds.
at 8:57 PM 4 comments:

guess who came to my feeder today? 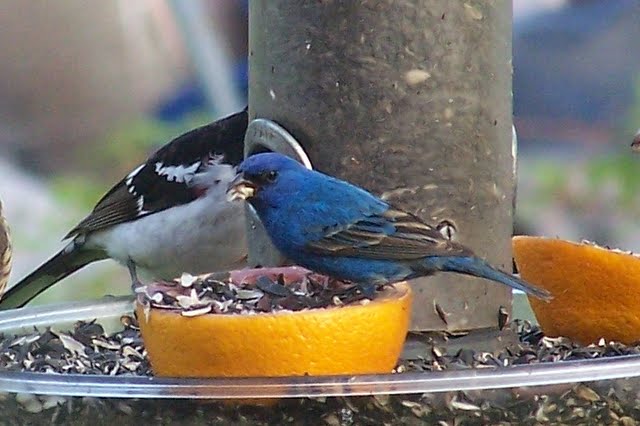 I think I've just died and gone to heaven, except the TV is playing a tribute to Harmon Killebrew, who is there now, so I must still be here.

A lot of time has passed since my last post. Time filled with work on a lake in some cold, windy, rainy Minnesota spring weather, time filled with junior high baseball and softball games, a band concert, and little time for anything else. May is slipping by, and warmer weather is finally upon us after lots of waiting and false starts, Minnesota style. Things are running well behind last year; I just planted onions, potatoes, peas, and greens two days ago. Today it is 72 degrees and humid, with more rain on the way. It's a good day to catch up with indoor tasks, like playing music and blogging. I try not to do too much housework on Sundays. :)

Long time readers of this blog will probably barely recognize the pair in the above photo. I swear they have each grown several inches in the last month! For reference, I am 5'7 and between them in height. Yes, Calvin has surpassed me and I don't think he'll stop growing for a while. Starflower and I have been sharing footwear for some time, and I hope for her sake her feet are done growing, because it's hard to find shoes beyond size 10! I can't leave out Mr. Attitude; he's approaching five feet tall and just as full of attitude as ever.

When I started this blog six years ago, or at least some time shortly thereafter, I decided to use pseudonyms for my family members. I thought it only proper to protect their privacy online. A lot has changed since then. The kids now have iPhones and text messaging and Facebook accounts in their real names (after some good conversations about online privacy and some common sense reminders). Many of you who are on Facebook know them by their real names. So I think the time has come to start referring to them as such on this blog. Part of it is for my convenience; I have to stop and think about which names to use in which context. So may I now present to you: Calvin = Vinny (or Vincent), Starflower = Nina, and Mr. Attitude = Joe. The Hermit will remain The Hermit for the time being, because it fits him. ;)

I enjoyed watching Vinny and Nina play baseball and softball this year. Nina, sixth grade, was in her first year of school softball, and she decided early on she liked playing catcher and worked hard learning what can be a difficult position. Vinny, in his third and last year of junior high ball, was outstanding. I know, I sound like I'm bragging, but he has matured into a thoughtful pitcher, quick-reflexed infielder, and solid hitter. His coach told him and two other players that they could be playing some varsity games next year, as ninth graders! 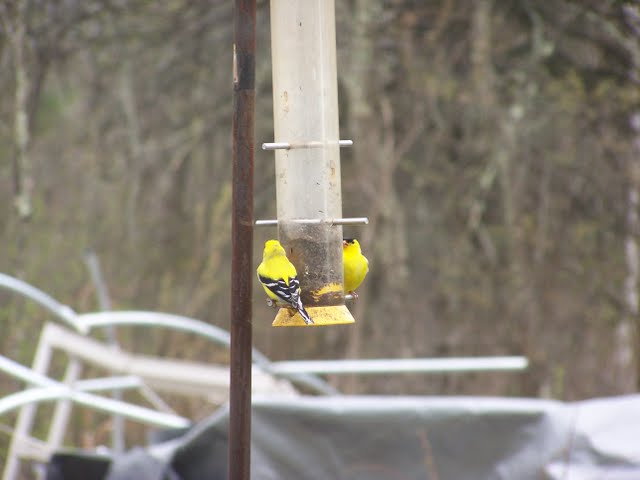 Now for a couple random bird feeder photos. If you think that looks like wreckage behind those beautiful male goldfinches, you are right. We had one of those tarp-covered Quonset shelters, with perhaps too much random junk inside, but one March day it collapsed under heavy snow cover. It's pretty unsightly right now, but there hasn't been much time, or good weather, to sort out the mess. So it sits. 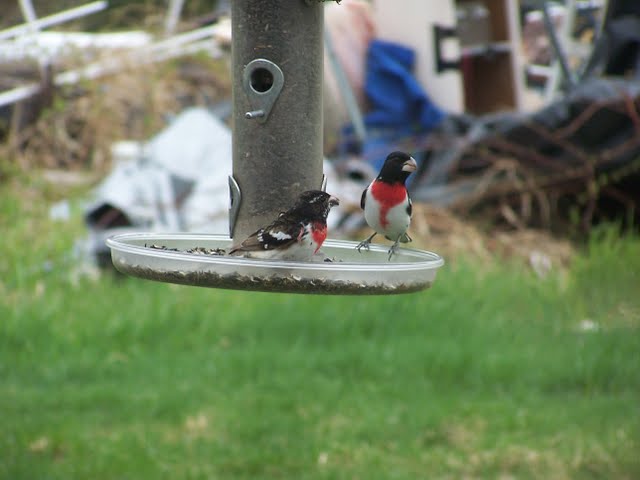 This has been the Year of the Rose-breasted Grosbeak at the feeders. For the last couple of weeks, we have had as many as six of them at one time. The front one in this photo is a first year male, and the other one is fully mature. In addition to these and the goldfinches, I have had purple finches, pine siskins, black capped chickadees, downy and hairy woodpeckers, red breasted and white breasted nuthatches, chipping sparrows, Baltimore orioles, and.......one male indigo bunting! A feeder first for me. Of course the camera was not available. Maybe some other time.

I have so much more to catch up on, and hopefully this post will break the ice and get me back in the habit of writing. For now, it's starting to rain and I think I hear a mandolin calling my name.
at 1:08 PM 4 comments: