Sand Creek crosses our road in two 8 foot concrete culverts. Most of the time they provide more than adequate room for water to flow. Yesterday they were a bottleneck. At least water was not flowing over the road, as it was in several locations on a nearby dead end road. The vortices look cool but deadly.
- Posted using BlogPress from my iPhone

...you walk outside in the morning and your driveway looks like this!

It rained a lot last night. The Hermit and I were home alone, the older two kids were camping about 20 miles east of here, and Joe was at a friend's house about ten miles downstream on Sand Creek. We were worried at times about the campers, with severe thunderstorm warnings all around, but they texted us that they were okay.

It had also rained a lot last Wednesday night, 3-4 inches. The creek was up, and Vinny's baseball playoff game got postponed from Thursday to Friday due to wet baseball fields.

I think we got about 4 inches last night too, but I never put two and two together until I saw the driveway this morning. The creek had overflown its banks, and was flowing through the old horse pasture to the right in the photo, the very place where I was going to put a garden but decided not to. The pond, meanwhile, had risen to meet the creek.

After I put on waders to investigate, I found myself wading through above knee deep water on the driveway. Wow, I thought, as reality started to sink in. We were flooded in!

The house is high and dry, so we are okay there. However, Sand Creek has to be a good 4 or 5 feet above normal. No one around here has ever seen it like this. We had to load bales of hay in the canoe and take the canoe out to the road and have a neighbor drive out to the horse pasture to feed the horses.

The horses had a small area of high ground to stand on. And see the baby horse in the photo? That is one of the many things I need to blog about.

The water rose a bit throughout the morning, and I used the canoe to bring a bicycle out to the road so I could survey the area. The road a half mile north of here was washed out in a low spot between two old gravel pits. There were county workers hauling loads of gravel and working on this holiday to make the road passable. Sort of. That same road is under water in at least four places.

One of our canoes had been parked along the creek bank, a good two feet above normal water level. As I was riding in the back of the neighbors' pickup truck to feed the horses, I noticed the canoe, on the other side of the road, lodged in some alders on what used to be the creek bank. Vinny and Nina were able to rescue the canoe, and the paddles were still inside!

It looks like the kids and I will be having a day off from work and school tomorrow. It rained and hailed again this afternoon, and I doubt we will be able to get out of the driveway until late tomorrow at the earliest. Joe is staying another night at his friend's house; they are having flooding issues there too. But I am thankful everyone is okay, and that the house is on high ground!
at 7:03 PM 8 comments:

Email ThisBlogThis!Share to TwitterShare to FacebookShare to Pinterest
Labels: around sand creek, weather

...to have big fun. At least that's what my kids were finding out over the weekend. 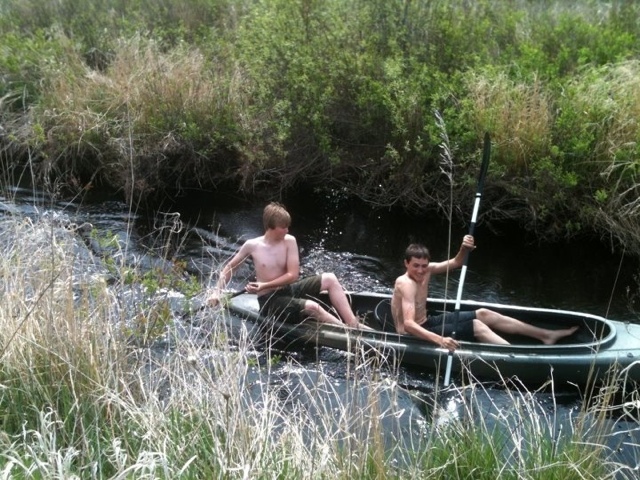 It was beautiful weather for May, with highs in the 70's both Saturday and Sunday. Nina and I spent Saturday at the wedding of an old friend of mine. Vinny had a couple friends over, and while much time was spent playing video games, the lure of Sand Creek and a kayak were too much to resist. They paddled upstream, occasionally having to pull the kayak over small beaver dams, until they found what Vinny described as "the mother of all beaver dams". It was built at the confluence of Sand Creek and a tributary, and was so large and had been there for such a long time that the creek had changed course, flowing around one end of the long dam and creating a waterfall.

On Sunday morning, Vinny and Devin (pictured above), along with Devin's brother Calvin, Joe, and Nina in our 17 foot Old Town canoe, held the first ever Sand Creek Canoe Race. Everyone paddled upstream to the beaver dam, which was the starting line. From there the length of the race was a good quarter mile or more. I went out to the horse pasture to watch them go by, and they were making pretty good time. Devin and Vinny were in the lead when I took this picture, but apparently there was a dispute over where the finish line was, and the three in the canoe claimed victory. A good time was had by all.

I always dreamed of living on a big lake, or a river big enough to canoe. Apparently my dream has come true and I never realized it until now. That kayak is calling my name sometime this weekend.

Email ThisBlogThis!Share to TwitterShare to FacebookShare to Pinterest
Labels: around sand creek, family

To garden, or not to garden

I never thought this would actually be a question. In 20 plus years of adulthood and marriage, I have always had some kind of a vegetable garden. Some years it was smaller than others, but I always felt I had to have something. With all the space I have here, to not use a good amount of it for growing food seems like, well, a waste.

This spring, however, I am re-thinking things, at least for this year. We have a number of things that need to be done on the house. Bathroom. Kitchen cabinets and sink. Deck. Flooring. Garage. The garage will be built by professionals, but I expect I will have to put in a considerable amount of time on the other projects. This full time job thing of mine gets in the way, and despite my desire to get everything done AND have a large garden, it does not appear to be realistic. Especially when I had planned on moving the garden to a new location this year, and the ground is not even tilled yet.

Relax, I tell myself. Abide. I will still have the garlic I planted last year, and maybe some plants in containers. But do I really want to go all out planting, only to feel guilty later about not tending weeds? Next year, when my house is a lot more finished than it is this year, I'll get back into it.