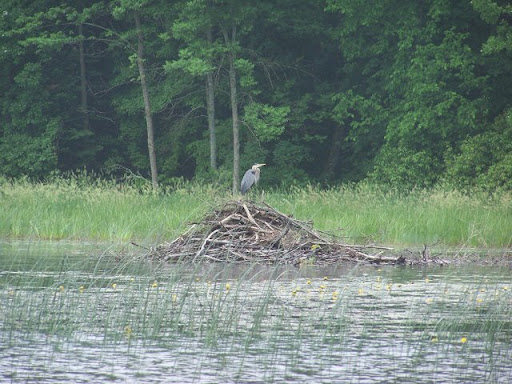 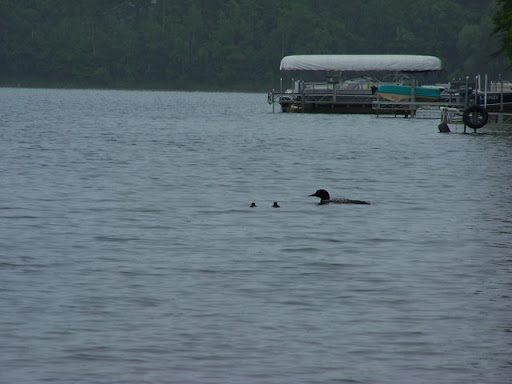 This may have been the cutest thing I saw today. Well, after those little hooded mergansers I saw at the fish rearing ponds. And the kittens...sigh...

I got to spend a day at work cruising around the shoreline of a lake by myself in a boat. How cool is that? I certainly did not mind.

There was another adult loon, but loons are so difficult to photograph. They dive just as you get the camera ready. I was happy to get this shot.
at 9:35 PM 9 comments:

Email ThisBlogThis!Share to TwitterShare to FacebookShare to Pinterest
Labels: birds, my job

Uh Mom...there's a snapping turtle in the canoe

One of the many details of the aftermath of Calvin's Party was that a canoe and a kayak had been left, upside down, in the pond. No big deal, they would not sink and could be retrieved on a hot day. Like today.

Calvin and Mr. Attitude were doing just that, when Mr. Attitude interrupted my tomato planting. "Mom", he announced. "There's a big snapping turtle in the canoe! Come see it!"

Of course I grabbed the camera, thinking "bloggable moment!" But I also knew that the real question was "Mom, can you get that snapping turtle OUT of the canoe?" 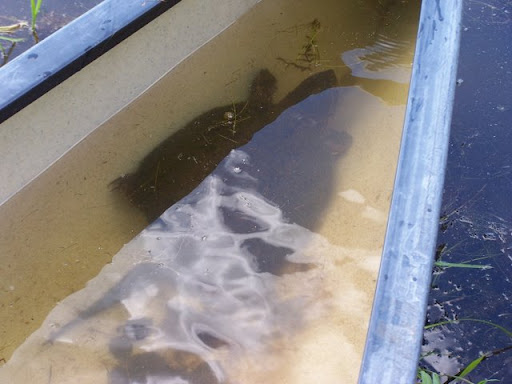 Hmmm...yes...a medium size, but no less vicious snapper. The kids know that I regularly wrangle with snapping turtles as part of my job. Only this one was easy, it was not in the wrong part of a one-way net. All I had to do was grab it by the tail. 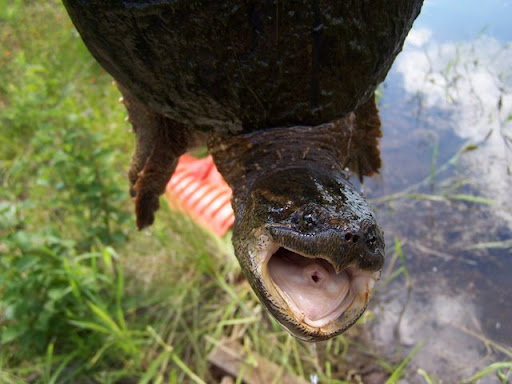 Of course, it protested. I held it long enough to take this photo, then I released it into the pond. On second thought, was that a good idea? We swim there...But I don't think it will be a problem...I hope...

I stayed to help bring in the kayak, and surprise! There was a large painted turtle in there! They must have liked the cave-like cover of overturned canoes.
at 6:06 PM 6 comments:

Life is so darn sweet

We are all hung over here from lack of sleep last night. With Calvin's big celebration, having five friends over and going through a 24 pack of Mountain Dew and six Pepsi Throwbacks, two Papa Murphy's pizzas including one Chicago stuffed, and one cheesecake, and hearing Calvin in the kitchen at 3 AM ("Where's the Kool Aid? We ran out of Mountain Dew!), and hearing everyone outside at 5 AM, even those of us who slept were a bit groggy this morning.

But, it was a huge success. I mean, what twelve year old boy would not want to stay up all night and run around at midnight with walkie talkies playing hide and seek in the woods? Sure, they had video games available, and they might have played them between 1 and 5 AM. But they also spent lots of time at the pond, running around in the woods from one tree fort to the next, and digging out a little ditch pond by the old railroad grade. That is to say, just being kids.

I am so happy we live here. It was a strange, convoluted road that led us to eventually end up here, but now the path makes sense. I would not want to be anywhere else, even though sometimes I wonder if this house will ever get done. Tonight it is raining and thundering, and this metal roof sounds nice over our heads. My tomatoes and peppers and eggplant have yet to be planted, but I may have lost them had I planted them two weeks ago. To everything there is a time and a purpose.
at 7:47 PM 3 comments:

Email ThisBlogThis!Share to TwitterShare to FacebookShare to Pinterest
Labels: thinking out loud

Cabin cleaned...check.
Wii moved over to cabin temporarily...check.
Big stereo system that's been sitting in the storage shed for years hooked up and running...check.
Mountain Dew and Pepsi Throwback in cooler...check.

Calvin is twelve years old today. I know it's trite to say where does the time go, but wow...last year he was excited to sleep in the (then unoccupied) new house with a couple of friends. Now he's taking over the cabin for the night with an old friend and a couple new ones!

While I was weeding one of my garlic beds yesterday, I noticed some "weeds" I was not familiar with. They had finely divided leaves, and were fairly abundant among the garlic plants. Curious, I rubbed one and smelled it, as scent can often give a clue in plant identification. This plant had a pungent aroma of...dill!

I do recall having a dill plant or two in that bed last year, and not having any use for it since my pickling cucumbers did not fare well. I will keep all of these plants among the garlic; they won't hurt the garlic, which is growing very well, and when I harvest garlic, in a month or so, I can let the dill take over and not have to worry about having enough when it's time to make pickles.

Some of my best gardening is done when I'm not really trying. But I am putting in a good effort this weekend, and I hope to have a lot of beds planted this evening.
at 12:57 PM 4 comments: 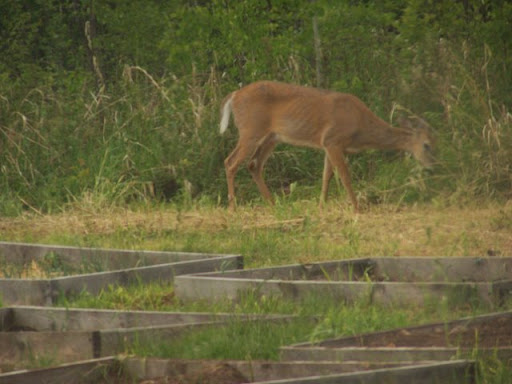 This picture was taken by the kids the other day. The nerve, to be so close to my garden beds in broad daylight! I think she may have even snacked on some lettuce or kale. Some kind of protection is definitely in order.

I spent the day hauling composted horse manure from a pile out towards the pond to the garden beds about 100 yards away, then working it in with the Mantis. I didn't get all of the beds ready for planting, but I'm getting close. It started raining about 3:30, which was a good quitting time. While I was hauling one load, I picked up a red bellied snake for the kids to see. It is temporarily residing in the former turtle-quarium. Temporarily is the operative word here. :)
at 9:10 AM 6 comments:

the smell of rain and wood smoke

It's been a cool June so far, and tonight we are getting some much needed rain. I love the sound of rain on our metal roof; even though it is muted by insulation it is definitely heard. Because it is a cool and rainy night, we have a fire going in the wood stove. Yes, it's June. But the fire feels good.

This morning I ran, and ran some more. 4.6 miles altogether, although I admit I may have been walking some on the last half. That is the most distance I have run since I was at least in my twenties, and it felt great. I am so amazed at how far I've come; last summer the first time I ran I struggled to make it a quarter mile and back. Today my goal was to make it to a place I wrote about two years ago. I did, and I walked around a bit although it was hard to see the stream amidst all the undergrowth. Some day I'll walk in there and check out the 20 foot high rock wall on the south side of the stream.

I was hot and sweaty all during my run, but as soon as I got home I got the chills, so the rest of the day was mostly indoors; the garden can wait another day. I hope to run again tomorrow morning, but I will easily bow to weather-related excuses. Actually, I'm hoping it will rain all night. We need it.
at 8:50 PM 5 comments:

Email ThisBlogThis!Share to TwitterShare to FacebookShare to Pinterest
Labels: around sand creek, exercise, thinking out loud

This morning I heard the unmistakable sound of the peacock. It sounded like it was out by the road, across the creek. I looked as I was leaving for work, but I could not see it. But this afternoon, I saw it standing on the side of the road, not too far from where I first saw it a few weeks ago. Later in the evening, as we were heading for a rare evening out, we saw it again, this time about half a mile up our road. I had found out from a neighbor that some people in the area were looking for a lost peacock, so we decided to stop by their place and let them know we had seen it. I don't know these people too well, and driving into their place was like going into a mini zoo. Horses, domestic ducks with their own pond, rabbits, turkeys, guineas, and several other peafowl. I let the woman know about her wayward peacock, and she said she would "go get it". I wish I could have tagged along to see if and how she accomplished the task. I hope she did, and that the bird is safe and sound at home.

After the first peacock sighting, as I was approaching home I became aware of two kids running towards my car from the direction of the creek. It was Starflower and Mr. Attitude, soaked from head to toe and grinning ear to ear. They had spent the afternoon swimming and exploring the creek. Calvin was with them earlier, and they even brought the canoe over and had fun going through the culverts under the road. In previous summers the creek has gone largely unused, mostly because we already have the pond for swimming, but also because there is a fairly deep hole in the creek, and this is the first summer the kids are old enough that I feel comfortable with them swimming there on their own. It sounds like they had too much fun exploring the shallow riffles to even care about the deep area. It makes me feel so good about living here, that they have the chance to do some real KID EXPLORING. No nature deficit disorder here!
at 10:19 PM 4 comments:

Email ThisBlogThis!Share to TwitterShare to FacebookShare to Pinterest
Labels: around sand creek, family 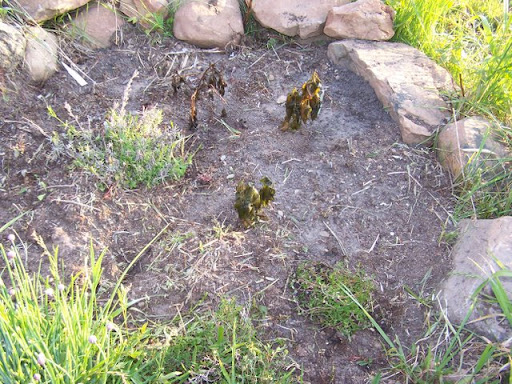 What you see above are my basil plants. What's left of them anyway. We had frost the night before last. It's a good thing most of my garden beds remain unplanted!

The kids are celebrating their first full day off school today. Sometimes I wish I was a teacher.
at 6:43 AM 4 comments: