The Kettle River, which is in the Upper St. Croix watershed in Minnesota, peaked at a record gauge height of 17.93 feet early in the morning of June 22. Normal height is probably around 6-7 feet. I had some time the evening before to check out the river at one of my favorite spots, the old Sandstone dam site. A hydroelectric dam created a reservoir upstream before it was removed in 1994. The removal of the dam revealed a waterfall, Big Spring Falls, which is shown in the first video. The second video shows the actual site of the old dam.


When the dam was removed, the sediment that had built up behind the dam for nearly a hundred years washed downstream. While dam removal is generally a good thing for river ecosystems, the sediment in this case filled up deep holes downstream that were once habitat for lake sturgeon, which is listed as a species of special concern in Minnesota. While this record river level was not a good thing for some people who lived near the river upstream (people who never had any reason to believe their homes would ever be threatened by the river), this surge of water just may wash out some of the fine sediment and restore some of the sturgeon holes.

At Big Spring Falls, I saw reminders of when water levels were even higher, thousands of years ago, creating cuts and kettles in the sandstone bedrock. The roar of water on rock drowned out every other sound and engulfed me, much like the roar of ocean waves. A dreadful and amazing sound.
at 9:24 AM 6 comments:

Email ThisBlogThis!Share to TwitterShare to FacebookShare to Pinterest
Labels: phenology, rock and water

Less than a month ago I was writing about the local flood we had here on Sand Creek. Now it seems like nothing; one road washed out in one place, and was fixed by noon the next day. Compare that with what happened last week in Duluth, MN, just fifty miles north of here. With up to ten inches of rain Tuesday night, the city's streets, creeks, and storm sewers were overwhelmed. If you are not familiar with Duluth, it is a beautiful city located at the westernmost point of Lake Superior. Much of the city is on a hillside that drops over 600 feet from the edge of the hill to the lakeshore. When you live on a hill with a marvelous lake view, you don't think about floods too much. Hardly anyone saw this coming. Streets are collapsed or washed away, houses are moved off foundations, and a couple of seals from the Duluth Zoo almost had the chance to make Lake Superior their home.

We go to Duluth once a month or more for shopping or more fun stuff. I have not been there since the flood; our main route into the city runs next to the St. Louis River and was under water for a while. 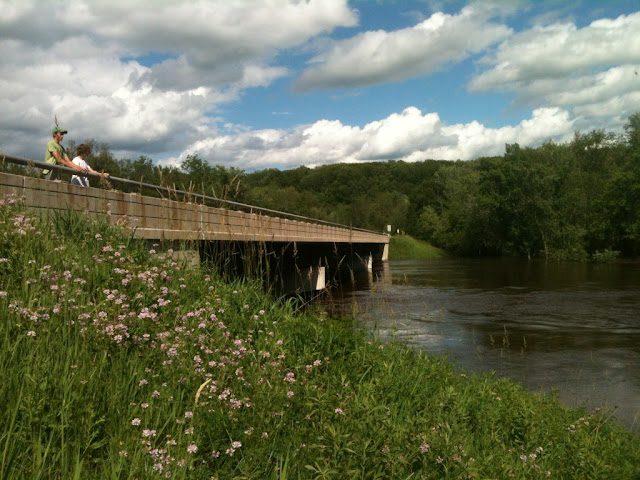 On Wednesday I was shocked to hear the news from Duluth. What I did not realize was that a lot of rain also fell on the headwaters of two local rivers, the Moose Horn and the Kettle. We "only" had about two inches of rain that night; Sand Creek was high but not nearly as high as it was three weeks ago. But there was a huge gradient in rainfall in less than thirty miles to the northwest, with six to eight inches falling in places with the ground already saturated from previous storms.

The Kettle River, pictured above at Highway 23 near the kids' school, crested Friday morning at a level that beat the previous record, set in 1972, by two feet. The bridge in the picture is the one I sit under sometimes and play flute, with the water a good six feet below me. 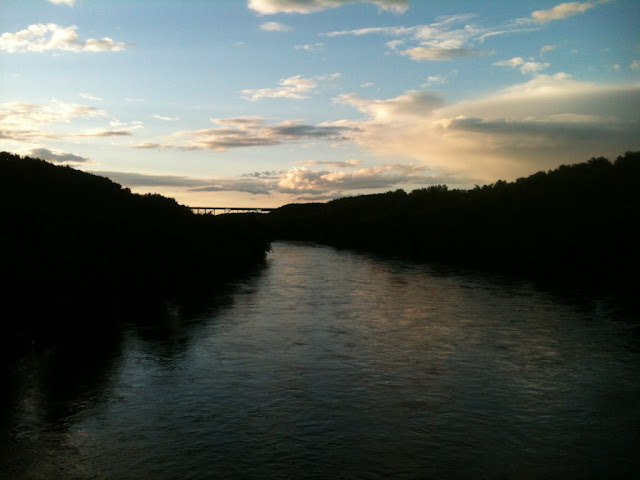 I have some friends who live on the shores of the Kettle River. I'm sure they never imagined water reaching the tops of their kitchen cabinets; after all, it had never even been close. While they will keep their house, they are faced with a long and expensive cleanup. There are people in the town of Moose Lake who are not so lucky; their homes are beyond repair. No one thought this would ever happen.

So many weird weather events, so little time, and lives are changed in an instant. Is this the new normal?
at 9:43 PM 3 comments:

With the last day of school over as of last Tuesday, summer has officially begun here. I still have to go to work, of course, but my work involves going out on lakes in a boat, so I can at least have some fun.

The kids and I, plus two of their friends, had our third annual camping weekend at the MN Bluegrass and Old Time Music Association's Homegrown Kickoff Festival last weekend. The weather was perfect, we all had fun, plus we got to see some of Minnesota's talented musicians. The Hermit stayed home, tended to household things, and that ended up being okay for everyone. Camping with extra kids is not for everyone.

The schedule looks brutal for the next couple of weeks. Vinny and Joe are both in baseball, with practices and games during the day. Did I mention Vinny was named All Conference Honorable Mention in baseball, as a freshman? I see good things in the years ahead.

Vinny is also taking Driver's Ed in the afternoon. Yes. Where did the time go? He will be fifteen a week from today, and is growing taller by the second.

Nina is in a volleyball league on Sunday nights. She and her teammates looked like they were having a lot of fun tonight, while playing some good ball. They won three 25 point games.

Me, I am really bummed that I totally missed the starflower bloom this year. They are everywhere in the woods, but they bloomed earlier than normal, and I did not get out where they were to see them.

And I have to tell you about St. John's wort. If you are mildly aware of herbology you have probably heard about its antidepressant effects. Let me tell you, it works. I started taking it just over a week ago, right before the camping trip, and I have not felt this balanced, this happy, in a long time.

So there you have it. My favorite time of year!