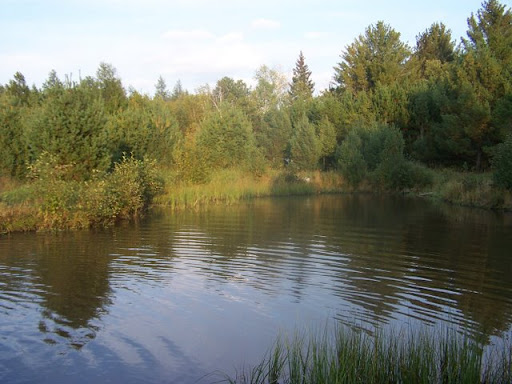 This September has been incredible, weatherwise. Tonight was just another golden evening. 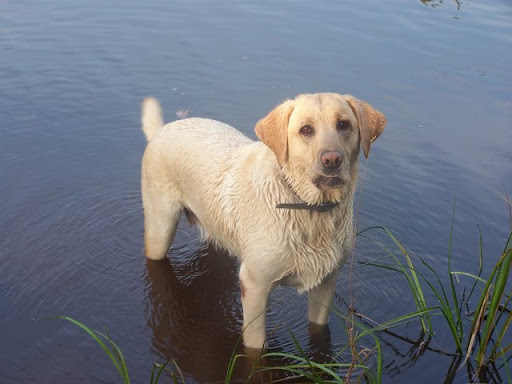 This girl was happy to finally have some pond time. Week nights are just too hectic.

I have more words somewhere. But I also have a cold and the urge to just crawl under flannel sheets after the sun goes down. The words will be there soon, I promise.
at 6:21 PM 5 comments:

the crazy woman under the bridge

Here's the problem: I get off work at 4:30, and Calvin's 7th grade football practice is not over until 5:45. It' s a fifteen minute drive from work to school (which is on the way home) at best, and even if I kill time doing some grocery shopping along the way, I still have about a 45 minute wait. I don't want to drive home and back, even though I could, because that would use up a gallon of gas. Ah the price I pay for living in rural paradise. :) But I'll gladly pay it since Calvin seems to really like football, and band, and school in general so far this year. Seventh grade was hell for me, so I am happy he's having a better go of it.

I was considering running during the wait, since I could put in 3 miles or so in that time. But it's been an unseasonably hot September, and I just haven't been in the mood for it. I know, I'm a slacker. And there's reading; I have had some good books from the library on the topic of herbal medicine, which is another recent interest I need to blog about. That, and I can't believe I read and understood Ralph Waldo Emerson's essay, "Self Reliance", all during lunch and break times yesterday. But no, it's hard to read Emerson in a school parking lot when there are parents all around looking either like the definitive argument for the obesity epidemic, or parading around in designer clothes and big hair and Hummers. Ugh.

So I've been doing something, twice now, that makes me feel like I'm being utterly subversive and nonconformist. I drive my car to a river bridge and boat access about a half mile east of the school. Usually there's no one there that time on a week day. I take my flute, along with O'Neill's book of Irish tunes, and a beer, and sit under the bridge and play music! The acoustics are great, although interrupted at about one minute intervals by traffic passing over the bridge. And today right before I set up camp, two canoeists went by, paddling upstream. I made sure they were out of earshot before I began.

It has been wonderful for my soul. Today I just started improvising in D minor and G minor, and the sounds that echoed off the concrete were amazing. It still scares me, being there sending my music out to the world, and perhaps unwitting canoeists. But I'm feeling my inner crazy f'er, and that feels pretty damn good. :)
at 8:52 PM 9 comments:

Email ThisBlogThis!Share to TwitterShare to FacebookShare to Pinterest
Labels: a peek into my subconscious, music

I have been listening to Greg Brown's Dream Cafe album lately. It was his newest album when I first came to know his music, and it remains as one of his best. Which is a difficult choice. One of the songs from that album, "Laughing River", is among my choices for Best Song Ever Written By Anyone, Ever. It says so much in so few words, about the heartache of giving up on a dream, but all the promise a new life offers. Well, way more than that. That is how Greg Brown writes. He gets it man, he really gets it. And I found out on short notice last week, he was coming to play in my favorite small city in Minnesota, a short 50 mile drive from my house, for a mere $4 entrance fee to the Harvest Festival and Renewable Energy Fair. What could be better? 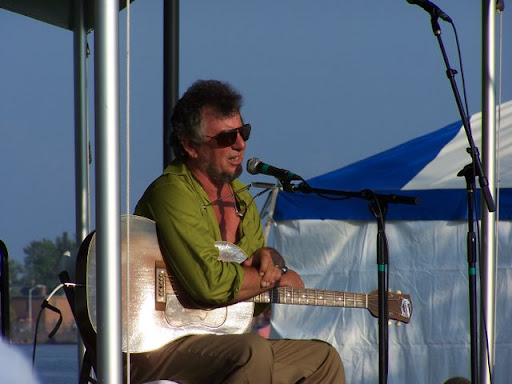 It was a perfect evening for an outdoor concert. In case you haven't heard, summer has finally arrived in Minnesota, and for a few days at least, polarfleece and sweatshirts are optional outdoor attire. The setting was a park on the waterfront in Duluth, near the landmark Aerial Lift Bridge. As the sun edged towards the hills to the west, recreational boats, tour boats, and the occasional Great Lakes freighter sailed by. Greg remarked that one's horn was tuned in D. I have a thing for musician nerd jokes like that. :)

I have to say, of all the Greg Brown concerts I have been to, which is more than a few since I first saw him in Hastings, MN in 1992, this was my favorite. He seemed so relaxed up there on stage, so in his element, and I was equally relaxed and taking it all in. He started off with "Home In The Sky", which I think is from his earliest album Iowa Waltz. Looking up at the sky and the seagulls circling over the harbor, I could agree that heaven is just about a thousand feet high.

Greg has a real knack for between-songs banter. With some self proclaimed "singer-songwriters", the between the songs thing can get a bit tedious. Not with Greg. As a matter of fact, what I liked best was how he denounced how self-absorbed some singer-songwriters these days seem to be. Ironic, considering how I thought the opening act belonged in that category hands down.

He did all the best. "Canned Goods", "Laughing River", "You Drive Me Crazy", and a whole bunch I was nodding and laughing along with. I was surprised he included "Kokomo", his very dark but humorous elegy to one night stands:

"You know she was just my kind, middle aged and crude
Nipples the size of jack balls and a real bad attitude
She wore my ass out so damn fast and left me nowhere to go
Just a sticky wicket and a Greyhound ticket on the road to Kokomo"

So there you have it. The Iowan poet, married to another musical poet Iris DeMent, father to musical poet Pieta Brown, and just all around perceptive, beat poet musician Greg Brown. I hope to see him again real soon.
at 8:02 AM 10 comments:

Email ThisBlogThis!Share to TwitterShare to FacebookShare to Pinterest
Labels: music

these are the colors I was talking about 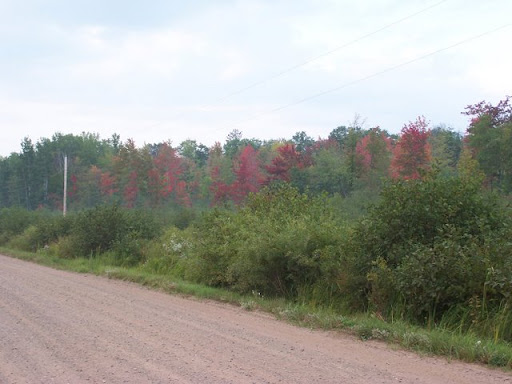 A hastily taken picture about a half mile down the road. Maples are so dramatic, aren't they. They blush at the first sign of fall. 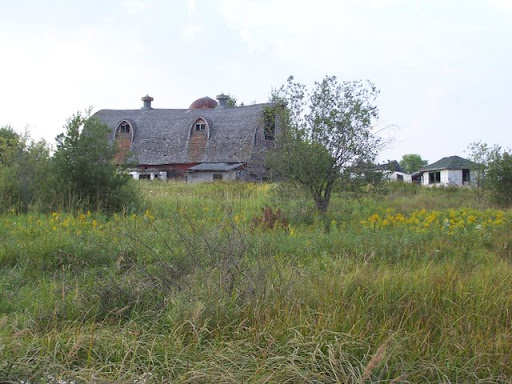 After I picked up a few necessities in town, I had about a half hour to spare before Calvin was done with football practice. So I drove around a little, and came upon this old barn. I am sure I have posted about it once before, but I cannot find it tonight. Anyway, it is still there, although I do not know for how long. Once it must have been an exciting thing, to build such a fine structure for the dairy herd you worked so hard to build. Somewhere along the line, expenses and farm programs did away with that dream.
at 9:33 PM 7 comments: 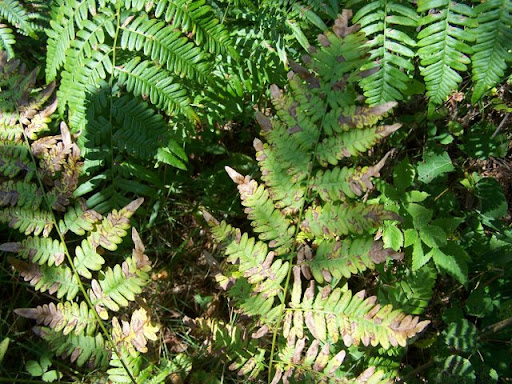 I really need to bring the camera with me to work tomorrow so I can share all the brilliant fall colors that are starting to appear. It sure doesn't feel like fall, though, with daytime temps approaching 80 and a humid, still night tonight.

Now that I'm taxi mom again for after school activities, I'm not getting home until after 6, which means less than two hours of daylight at home. Which I would be glad to have two months from now.
at 9:15 PM 2 comments: 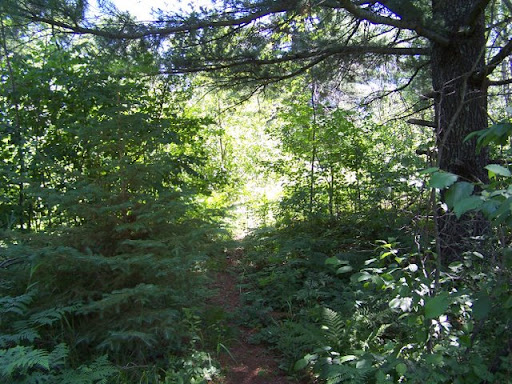 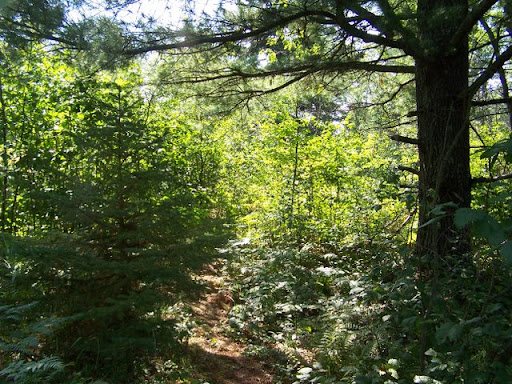 early September
I took these two photos of the same scene purely by chance. (Or did I? Maybe there is no such thing as chance). I thought it would be a study in changes, but I am more struck by the similarities.

Labor Day weekend is a time of transition, with the kids starting back to school on Tuesday. I have found I probably take the transition harder than they do.
at 8:10 AM 2 comments:

of trout, and the aquatic mammals that eat them

I was in the midst of another adventurous day at work. Lately, due to a coworker's taking family leave, I have been out more than in, sampling one stream after another with electricity. And you know what, I'm enjoying it, more than I have enjoyed any other work I've done (at work that is) since I can remember. In the last couple of weeks I have seen some nice waters, gotten to know a lot more of the local plants, and even seen a few brook trout.

I heard my cell phone signal a new voice mail. 99 percent of the time my cell phone messages are anything but urgent, but even though I was not in a strong signal area I decided to check it.

"Mom! There's a family of otters in the pond!"

My battery was going low, or I would have called back just to make sure I heard right. Today indeed a family of four otters had taken over the pond and were frolicking wildly! I wish I could have been there to see them. New wildlife sighting at Sand Creek!

Of course, this probably explains why last Friday, when we finally got around to sampling the stretch of Sand Creek that flows through my land, there were no trout. Otters eat fish, and they can take down the population of a brook trout stream easily.

But it does not explain why today, in a shallow, alder choked stretch of stream about five miles south of here, we sampled thirteen small brook trout in about a 500 foot length of stream. By small I mean, you would not even think of taking them home for dinner, but they were there! We were totally not expecting to see them. I'm sure otters lurk there now and then, and yet brook trout survive against incredible odds.

Nature is wonderfully balanced that way.
at 7:36 PM 4 comments: