It's been a long time since I've done a birding-oriented blog post. It's not that I have not seen birds, but being the opportunistic birder that I am, as well as the lazy blogger, I haven't taken many bird photos this year, or taken the time to report my findings. Today, however, I had a birding moment that not only resulted in a new Year Bird, it also gave me reason to reflect on what makes a good birder and how every experience is a teacher.

In a work-related errand, I went to a small dirt road that had been built over a bog many years ago. This road had been flooded over and washed out many times in recent years. Well duh, you build a road on a wetland, what do you expect? But nevertheless, the township wants to clean out an old ditch to see if it will alleviate the flooding. Truthfully, I'm not the right person to make that determination. I'm not a hydrologist. But even without those credentials, I can tell you I really don't think clearing a little brush and silt out of a ditch will make much of a difference in the drainage of a hundred or more acre bog, especially when the land (bog) is flat and the next stop is a 35 foot deep bog lake. But whatever. 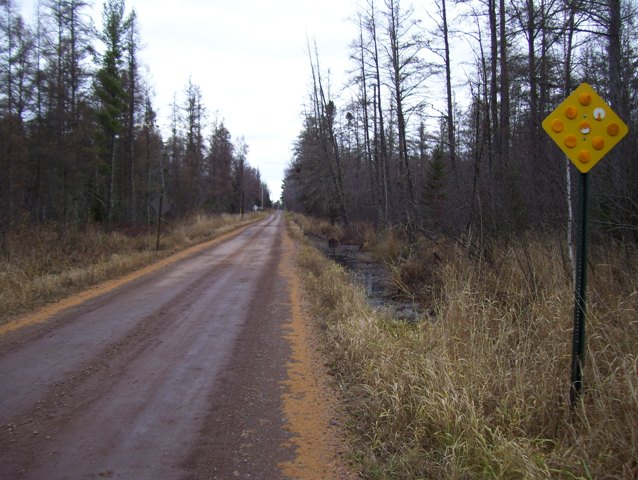 This is the road. The water level is about a foot below the road bed. Something tells me that this road should never have been built here. But again, that's not mine to judge. I liked how it looked though; with all the tamaracks and spruces, and the understory of unique bog plants, this looked like great bird habitat.

As I paused to look at the side of the road in search of a culvert, I heard the sound of little bits of something dropping from a nearby tamarack. Birding skill #1: Use your ears. I immediately scanned the tree branches for the source, likely a bird or red squirrel feeding on tamarack cones.It took a while, but I finally picked out a flock of about six smallish birds, occasionally flitting from branch to branch as they fed on buds or cones. Birding skill #2: Think habitat. What kind of bird would be using tamarack as a food source? Something told me these weren't chickadees, or goldfinches; they just weren't acting that way. Birding skill #3: Watch for behavioral cues. 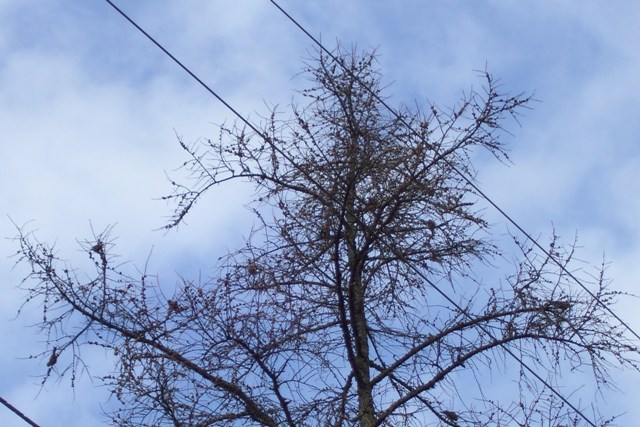 I was regretting not having a pair of binoculars with me. Birding skill #4: Always carry your binoculars! The birds were just dark silhouettes against the midday sky. But I had the work camera with me, with its limited zoom, so I thought maybe I could take a few photos and examine them in greater detail later. Birding skill #5: Always carry your camera! I was also thinking for some reason that my iPhone, which has the cool Sibley bird app, was still in the car. Birding skill #6: Carry a field guide! So I decided to head back to the car and get my phone. But before I did that, I decided to try "pishing" to see if that would bring any of the birds closer. Birding skill #7: "Pishing" comes in handy. In no time the entire flock took notice and flew across the road. I, of course, saw little dark flying silhouettes. But I did hear some vocalizations, and that was enough to rule out a few common species. Birding skill #8: See #1. I got back to the car only to realize my iPhone had been in my pocket the entire time. I opened up Sibley's and scrolled to what was becoming a likely suspect. 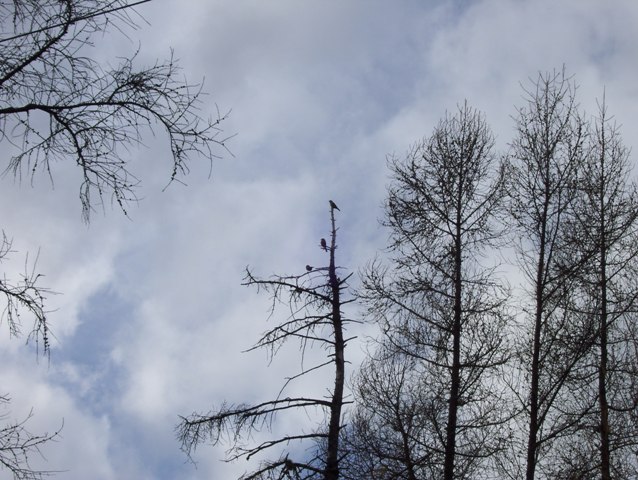 Recognize these silhouettes yet? The audio calls in the app matched up with what I had heard. And when I zoomed in on this photo, I was able to see some distinctive white wing patches.

White winged crossbills! My first in a long time. But along with the satisfaction of seeing a species that is only seen irregularly, I noticed that my birding skills were becoming more sharp. Perhaps the best way to develop identification skills is not by being told what species is in front of you and then watching it, but by being presented with an unfamiliar species and figuring out what cues might distinguish it from other species.

Email ThisBlogThis!Share to TwitterShare to FacebookShare to Pinterest
Labels: birds

Remember how I used to rant about all terrain vehicles? 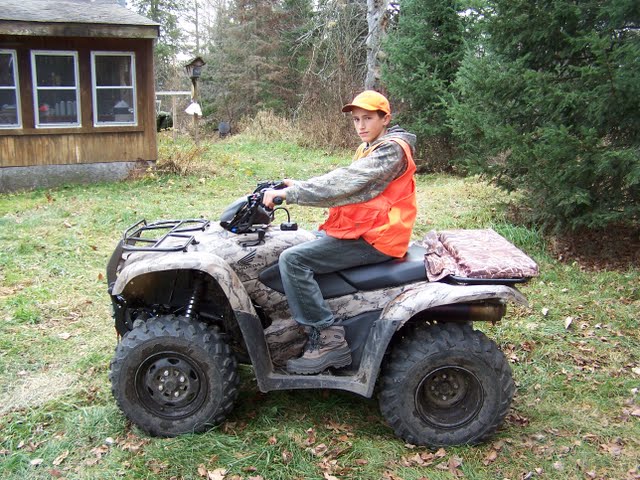 We own one now. And that very grown up looking young man, and one very capable driver, is my son Vinny. Now 5'11 or so.

It was an evolution in attitude. I used to be a Thoreau-driven, Luddite kind of person. But when you have 40 acres, and the acreage tends to get grown up in brush if you ignore it, and trees fall across established trails, it's hard to maintain the land without horsepower. Or gasoline power. And given that snow falls in the winter, and we have a very long driveway, and it's hard to do with a city-dweller snowblower...well, enough excuses. And Vinny doesn't need excuses. At 14, he's ready to ride!

The best thing is, we will use it to plow my new garden spot. After a lot of frustration, and deliberation, I have decided to move my garden out to the old horse pasture in the front part of our land. 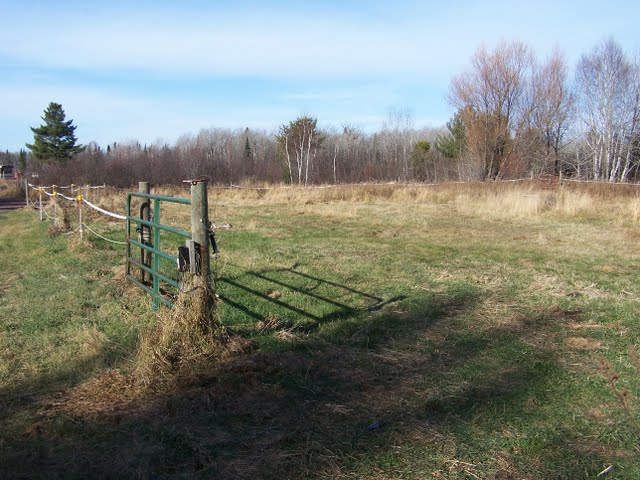 I was getting tired of grasses and other weeds constantly getting into my raised beds. Which weren't really raised beds, considering I tilled down below the boards every spring, and pulled up new rocks all the time. Many of the beds were rotten and needed replacing. Added to that is the fact that some aspens are growing just south of the garden, and will shade it in the near future. The old horse pasture has less rocks, and has been enriched by manure for a while. I plan to do a more "traditional" garden, plowing up an area instead of maintaining individual beds. 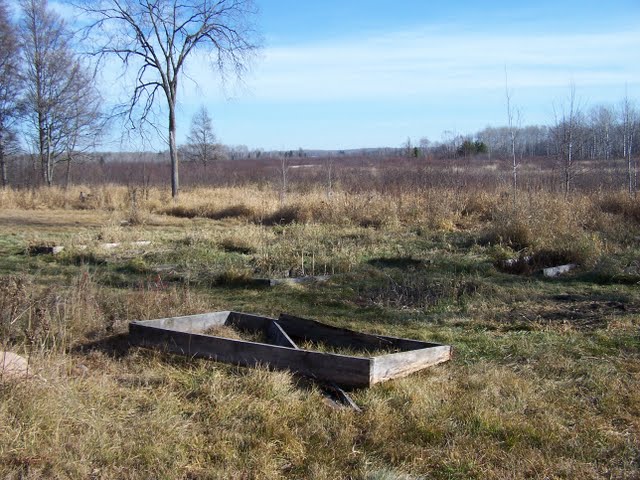 Besides, the kids needed additional space in the outfield of our backyard baseball field. 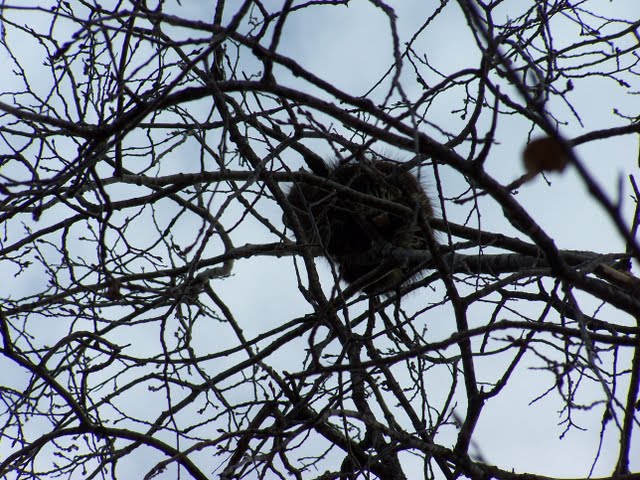 Vinny and I saw this porcupine while he was taking me on a 4 wheeler tour. Not the best picture, but it was fun to see after a bumpy ride across the swamp on the old railroad grade.

This has been a very mild November thus far. We had a couple of inches of snow the other day but it has disappeared, and the pond has frozen over and thawed, and Sally can still go for a swim. She is beginning to dislike going out in the deep water; I imagine when the water is in the 30's, even a Labrador will give it a second thought.
at 7:41 PM 5 comments: