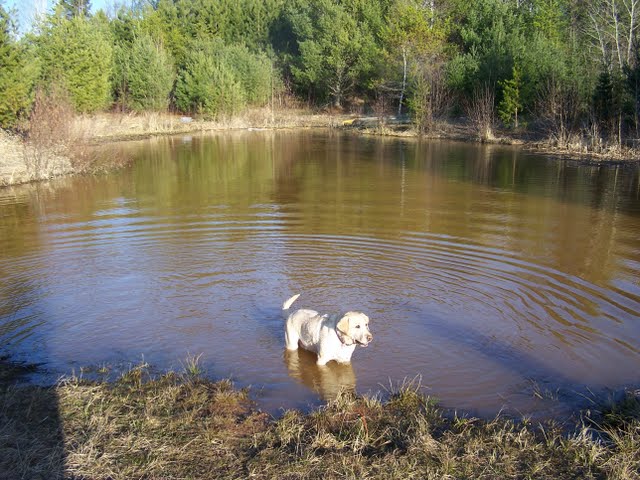 Today was the day. The pond is 99% ice free, and of course Sally had to celebrate. We humans will wait a while, at least until the water temperature is within 30 degrees of body temperature.

Spring is unfolding in the wondrous way it always does. Birds are returning, woodcock are doing their spectacular display, ruffed grouse are drumming, robins are singing, and in the last couple of days, frogs have started singing. It's a wonderful time here.
at 7:35 PM 5 comments:

The daily highs have inched up into the forties and sometimes fifties, but the wood stove is still a necessity. The major snow cover is gone, but snowbanks still persist on the north side of buildings and anywhere large amounts of snow were piled up. Road restrictions are in place, which means I can drive without meeting logging trucks. There will be no logging trucks until the frost is completely out of the ground.

Today I saw my first turkey vultures of the year, soaring over the Kettle River. Sand Creek has absorbed the majority of the snow melt, and may have reached its crest today; the banks are overflowing but are nowhere near reaching our house; that's the nice thing about having huge areas of low wetlands upstream.

The woodcock were putting on their show tonight, making their strange call before spiraling into the sky in a shower of twitters. What an amazing bird.