last week of the summer

It's only the fourth inning of the Twins game, and it's getting dark. A waxing moon is rising, but still the kids are outside squeezing in another few pitches of homemade baseball.

I found a beautiful place today. Have you ever happened upon a place where you are immediately mesmerized, where you feel the need to come back and spend some time? I will, and I will bring a camera. Picture a stream cascading over ledges of sandstone in a small valley. I was there for work, but I will be back on my own time.
at 8:15 PM No comments: 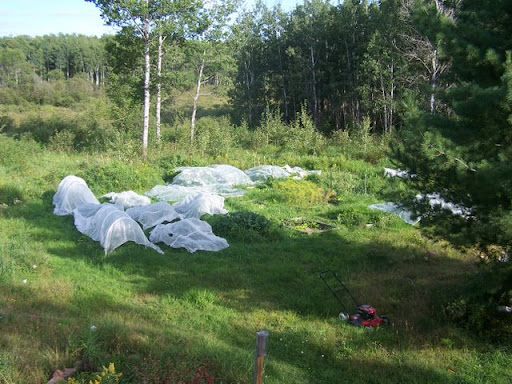 It's the last night of August, and there are frost advisories out for the area. Considering this garden's history of being stricken by frost even when no advisories are present, I thought it would be prudent to cover up the tender stuff. I put so much work into growing tomatoes, I would like to see more than one ripe one yet this year. And my one watermelon is now softball size, can't give up now!

I had a strange but delightful run this morning. Usually in five miles or more, I will only see one or two vehicles at the most. And usually at least one of those is someone I know. But this morning when I turned east on the dead end road I know so well, I was passed by pickup truck after pickup truck, all late model and shiny, all towing trailers with dirt bikes or 4 wheelers. Great. Where on this little dead end road could they possibly be headed? I thought about turning around and taking a different route, but hey, this is MY road, my run, and I'm not going to let a bunch of city kids with their toys chase me off of it.

It turned out they were all headed to one property about two miles down the road. I don't know the details, but there were dozens of vehicles parked there, dirt bikes revving up, the smell of exhaust and cigarettes. I ran past the property, to the end of the road, when I realized something: I felt strong. Maybe it was my disgust at seeing all these gasoline powered playthings in my territory, or maybe it was the silent prayer I said at the beginning of my run, asking for strength. Whatever it was, I felt like I could go on and on. I ended up running down a little side dead end road a half mile and back, and going strong the rest of the way home for a total of seven miles.

I can't recall ever running seven miles, not even in my more youthful days. And I felt like I could have gone for at least ten.
at 7:40 PM 4 comments:

And taking with them the last days of summer. They swoop down low over the asters and goldenrods, hanging in the stillness of the evening air.
at 8:08 PM 3 comments: 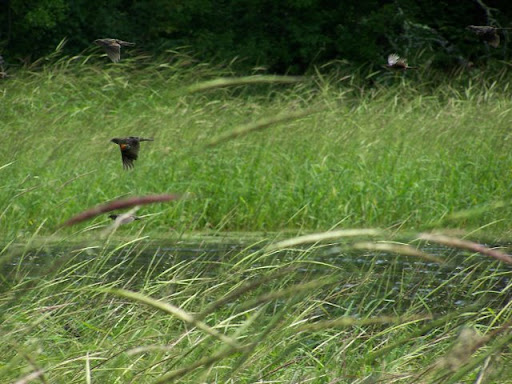 We saw these red winged blackbirds flocked together and feasting on wild rice at a local lake on Friday.
at 4:14 PM 3 comments: 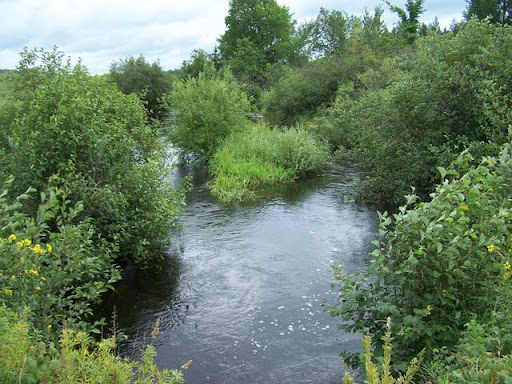 Well, as much as a low gradient stream can rage. This is Sand Creek after a 2 day total of 6.25 inches of rain. Without a "before" picture it's hard to tell, but normally that island in the middle is not flooded. 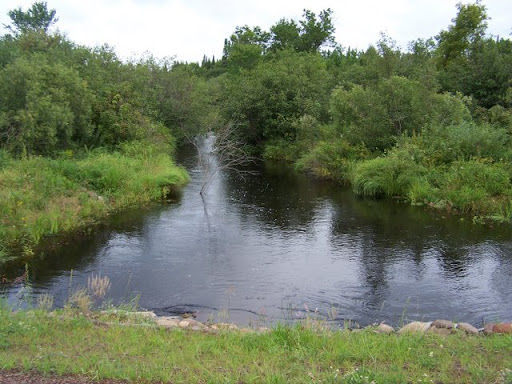 This is the part of the stream I sampled by electrofishing about a week ago. Back then, the water in the foreground was about eight inches deep. Now it's almost to the tops of the three culverts under the road, which are about three feet high. 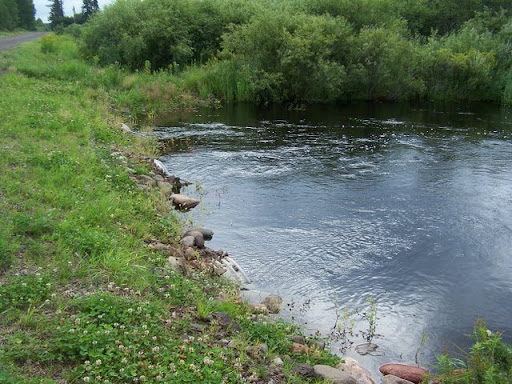 Here is the downstream end of the same road crossing. Last year when they replaced the culverts I thought three 3' round culverts was maybe overkill. The closest one in the photo had no water flowing through it on Saturday. A little overkill comes in handy in torrential rains.

Of course the pond is full and running out the overflow culvert. And of course, the kids left a canoe, kayak, and duck boat in the water; all are floating very low and since the kids are on vacation in Nebraska, I will be doing some bailing tomorrow.
at 8:53 PM 2 comments:

Email ThisBlogThis!Share to TwitterShare to FacebookShare to Pinterest
Labels: around sand creek, weather

I never got around to emptying the nine tenths of an inch of rain we got over the weekend from the gauge. So when it started raining yesterday morning I made a mental note to subtract that from whatever was in there when it stopped raining.

It poured all day and did not stop until around 7 in the evening. At work I had to put on waders to move my car, which was in a puddle several inches deep.

When I finally got out to the rain gauge, I poured off the first inch of rain. We have one of those gauges with an overflow catcher thing, so I filled the gauge from there. Then I filled it again, and again, and again. The total from today: over five inches. I don't think I've seen a rainfall like that since we've been living here!

I blame Starflower. The evening before she had washed a load of her clothes and hung them out to dry. :)

We're still playing catch-up from a drought period, so this rainfall will help recharge the groundwater and get Sand Creek flowing a little faster. There's no danger of flooding here, unless we get a huge rain that completely fills up about fifty acres of wetland upstream.

Today I'll be on the road, driving southwest to Sioux Falls SD (yes, I'll actually make it to another state besides Wisconsin) to bring the kids to stay at my stepdaughter and her fiance's in Nebraska for a few days. How do I spend a kid-free weekend at Sand Creek? Rumor has it there may be some home improvement projects in the works...I'll keep you posted.
at 8:23 AM 4 comments:

For my job today I got to spend some time exploring a stretch of Sand Creek upstream from my place. I run by the downstream end of that part of the creek nearly every day now, but I've never gone more than a short distance upstream. The 80 acre parcel the creek flows through there is owned by the state, and managed by my office for brook trout habitat.

Brook trout are particular about habitat, even more so than rainbow or brown trout, which are not native here. They need cold clean water with a variety of habitat including deep pools and gravel substrate for spawning. They do well in the larger streams on the North Shore of Lake Superior, but I have also seen them in very small streams.

This stretch of Sand Creek was mostly narrow (10 feet wide) and shallow, with sand for substrate. Much of the stream was shaded by alders that hung so low we had to lift them up to pass through or crawl underneath. Alders have a way of doing that. The shade keeps the water from warming in the sun, but the branches limit all but the most determined angler.

The water was cool. Cold, even. In a deep pool I held my hands underwater and had it not been such a hot day, it would have been uncomfortable after a short time. I have been in a few small streams around the area lately, but none with water nearly as cold as this. The source of much of the water became apparent as I moved upstream; here and there along the banks were flowing springs. I lost count of how many there were. Very unusual for streams in this part of the state! My theory is that this part of Sand Creek lies close to an ancient bedrock fault, and the bedrock is close enough to the surface to keep a layer of cold groundwater just under the soil's surface. The water table has been pretty low around here lately with the drought; I think in a more normal year those springs would have been flowing even more.

We were successful in sampling brook trout: three small adults and one young-of-year. We also sampled one mottled sculpin, which is a good indicator species for trout streams. I'll bet there were some more trout and sculpin in the deep pools we could not sample well. All were released unharmed.

Tomorrow I may be on Sand Creek again, a bit closer to home. I'll try to have the kids bring the camera out if we sample there!
at 9:30 PM 6 comments:

Email ThisBlogThis!Share to TwitterShare to FacebookShare to Pinterest
Labels: around sand creek, my job 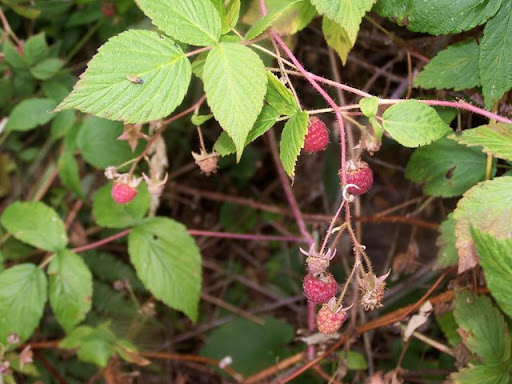 I really seem to have fallen behind in blogging lately. Summer is happening, kids are as busy as ever and so am I, work is crazy, and in between I'm trying to keep the house in some semblance of order. But last Sunday, the wild raspberries were calling me, and I spent all morning crawling through brambles picking the tiny, juicy, sweet as summer berries. 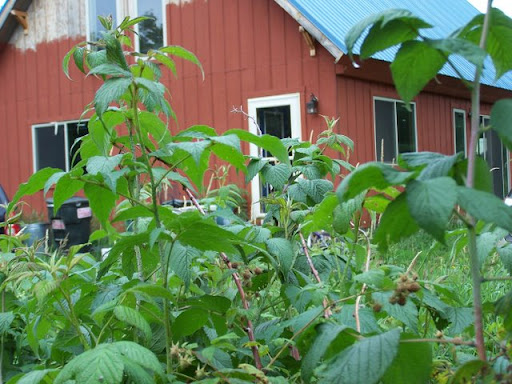 I didn't have to go too far from home. Since our riding mower died a couple of years ago, large areas of our land have gone unmowed, and raspberries are one of the first plants to take over. They produce fruit in their second year, so while in other years we have had a few berries here and there, this year we;ve had enough to make it worthwhile to spend some time picking. 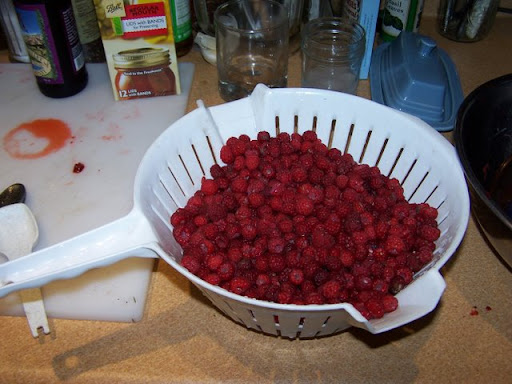 I ended up with about half an ice cream pail's worth, which was enough for four half pint jars of jam, which I made last Monday. I also made twelve half pints of strawberry jam from some berries the kids and The Hermit had picked. It was my first canning effort in the new house!

There are more raspberries out there, and I'm hoping to get my hands on some fresh local blueberries, but do I have to say "so much to do, so little time"?
at 8:52 PM 4 comments:

Email ThisBlogThis!Share to TwitterShare to FacebookShare to Pinterest
Labels: around sand creek, cooking

cuteness on the banjo case 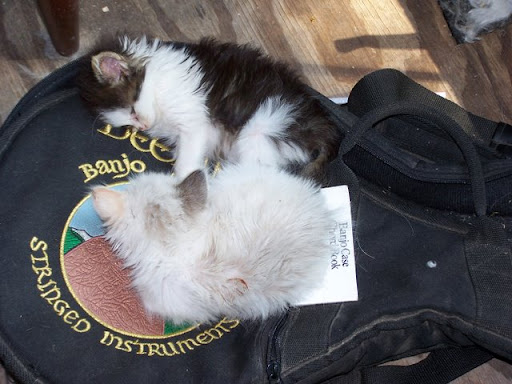 Email ThisBlogThis!Share to TwitterShare to FacebookShare to Pinterest
Labels: cats

Status of The Garden, Early August 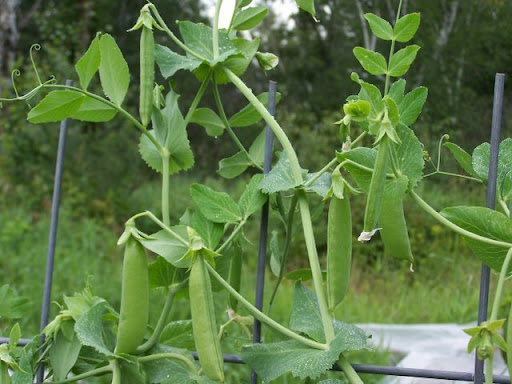 Sugar snap peas in August? Well, it's been a strange year. These are the products of what is left of the pea vines after Ms. Doe got after them. I replanted yesterday, thinking optimistically as ever, that I may get a fall crop in. I will take steps to decrease Ms. Doe's interest in garden greenery. 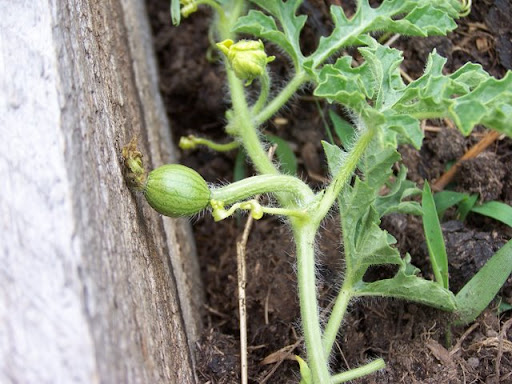 What is that? A micro melon? This is my first year's attempt at growing melons, and I am encouraged that I even see flowers and mini Blacktail Mountain watermelons.

Doesn't this tomato bed look great? Of course by this time of year it should have fruit in various stages of ripening. But this is the unsung Coldest Spot in Minnesota after all... 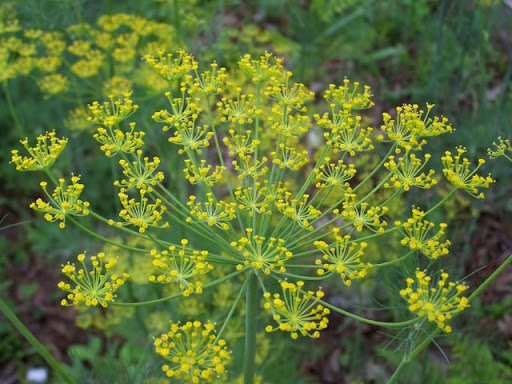 And the dill. Best crop ever, and I didn't even plant it! I keep hoping my miserable frost bitten pickling cukes will catch up to it. By the way, I love the repetitiveness in the dill head and dill flowerettes. Garden fireworks.
at 7:56 PM 5 comments: