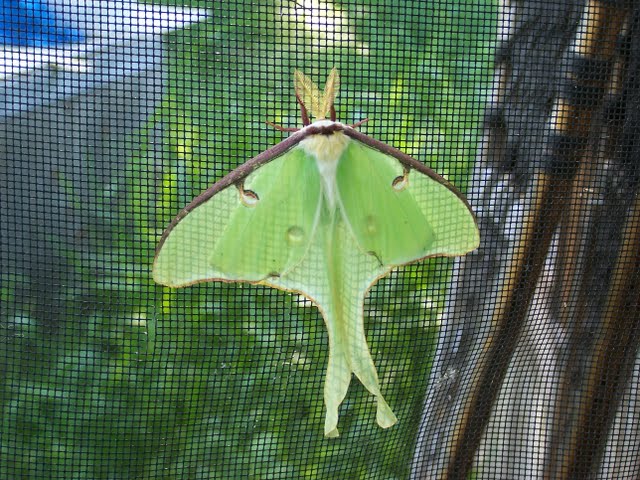 Finally saw one of these beauties on the cook shed door. Exquisite.
at 8:59 PM 9 comments:

Email ThisBlogThis!Share to TwitterShare to FacebookShare to Pinterest
Labels: nature 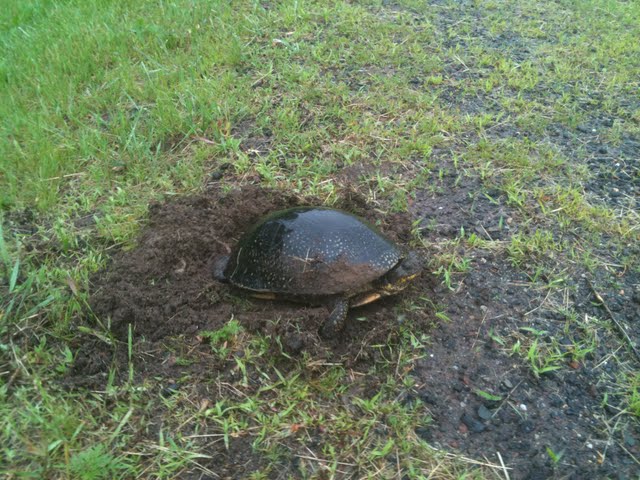 While I was driving home from work today at 55 mph, a turtle caught my eye. Turtles laying eggs by the side of the road are fairly common this time of year, but this one was DIFFERENT. It was the size of a small snapping turtle, maybe twelve inches long, but the shell was too round and helmet-like for a snapper, and it was too big to be a painted turtle. I eased to a stop (appointment for new brake pads is in place, don't want to overuse them at this point), turned around, and parked nearby. I took the above photo with my handy iPhone.

The Blanding's turtle is considered a threatened species here in Minnesota, and this was the first one I had ever seen. They live in wetlands, especially adjacent to running water, and nest in sparsely vegetated upland areas. Unfortunately, they seem to like roadsides for nesting. I'm guessing this one came from Bear Creek, which could mean she would cross the road when she is finished laying eggs. It is not a busy road, but I'm praying for her!

These eggs will probably hatch in August or September, and the young turtles will have a long journey to find a suitable wetland or Bear Creek to spend the winter. I marked the location on my phone, and I will be thinking about the mama turtle and her eggs every time I drive by.
at 6:26 PM 7 comments:

Vinny and Nina spent the afternoon at the neighbors' house, earning money for mowing and other chores. Now I just watched them take the truck, alone, out to the horse pasture to feed the horses.

Email ThisBlogThis!Share to TwitterShare to FacebookShare to Pinterest
Labels: family

As I sit here in the very un-air conditioned cabin, it is probably about 90 degrees. The Twin Cities had a record high of at least 103 degrees for this date, so I should be thankful I'm at least in the outer reaches of the Lake Superior cooling effect. But if I remember correctly, and I do have a short memory when it comes to these things, we had frost last week. And, lows in the 30's are predicted by the end of the week. So it's a good thing half the garden is still a jungle and the beautiful heirloom tomato plants my neighbor Patty gave me are not in the ground yet.

Does anyone from Minnesota (Lynne?) remember the Northwestern National Bank Weatherball? In the days before the Internet and instant weather updates, the bank had a cool idea: build a gigantic neon ball atop your building, come up with some catchy slogans ("Blinking white- cold weather is in sight), and there--you're a Minneapolis icon! I remember I even had a plastic coin bank with a replica of the weatherball. Unfortunately, the bank building was damaged beyond repair in a Thanksgiving Day 1982 fire that was caused by arson in the neighboring vacant Donaldson's department store building. The bank became NorWest, then Wells Fargo, and the weather ball was no more.

I thought about the weather ball today and the wisdom it might hold. I would have had another code for it: Weather ball is pink--don't blink. The weather will change in a minute!

I do have a blog post in mind about a great weekend, which involved, among other things, the most ukuleles I have seen in one place at one time. But that will have to wait.
at 6:27 PM 4 comments: