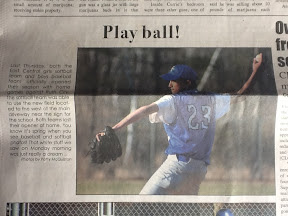 It is now baseball and softball season here, which means I can just as well forget about cooking dinner or being home before eight two or three nights a week. Vinny and Nina love these sports the best, and I am more than willing to sacrifice time at home to see them play.

Yes, that is my #23 gracing the cover of the local newspaper this week. Of course I was just beaming when I saw it. After the starting pitcher gave up a few runs in the first inning of their first game, Vinny came in and did a good job for the rest of the game. And Thursday night he was starting pitcher and went the full game. They lost 6-2, but it was a good game and the opposing coach even complimented our coach about Vinny's performance.

A few notes about this team. We are a small, rural school, and there are only about 13 players out for baseball this year. They were sub section champions last year, but they lost a few good seniors. Of the 13 players, four are freshmen. There is no junior varsity team. Just about everyone on the team can pitch. BUT- Vinny has been to pitching camp, and has had many hours of practice in the back yard (we have worn out one pitch back, just ordered a new one). He takes his time, thinks the situation through, and mixes things up with a few different pitches. Which is why Vinny has quickly established himself as the eminent starting pitcher for the Eagles. Oh yeah, he can hit too. I haven't kept track of his batting average, but it is pretty darn good. He has been asked to play American Legion baseball this summer for a nearby town. More good games to watch.

- Posted using BlogPress from my iPad
at 3:41 PM 3 comments:

Announcing the resurrection of my food/domestic blog after a long hiatus (that's a fancy term for laziness)! I was so happy with how my fried rice turned out last night I just had to share the recipe.
at 8:51 AM No comments:

Joe has a new bike. The older kids are headed home from their amazing trip to Washington DC. Peepers and western chorus frogs are singing, and woodcock are displaying. The road is finally dry enough that I don't fear my new car getting swallowed up by a gigantic mud hole. Said car is averaging over 35 mpg. My new kitchen cabinets, and bath fixtures, will be delivered soon.