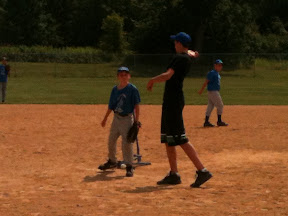 I took a day off work today so I could watch Joe in his last baseball games of the summer. Life is too short to not see that. And Vinny volunteered to help coach the game. No incentive whatever, he just wanted to do it. The coach was certainly pleased about that, and now Vinny has a job next summer coaching the 5th and 6th grade team. Joe is not so sure about having his big brother as a coach. :)

They played three close games. Joe had some great plays as first baseman, and even crossed the infield to back up a throw from the outfield and throw out a runner at home plate! However, it came down to a coin toss on one game and an extra inning with a bonus starting runner on second in the other.

I witnessed some obnoxious behavior by parents and even coaches. Luckily none of it was from our team.

After the last close loss, our coach gathered the team together for the end of season speech. While acknowledging good plays, he also made one important point: Hitting suffers if you don't show up for practice. And we could have used more hits.

Which brings me to my rant. The main reason players do not show up for practice? Not that they don't care. Or even if they don't have a ride; there are parents who would drive thirty miles one way to pick up a kid so they could make it to practice. I have driven well out of my way to give kids rides home from various sports during the school year.

No, the main reason is this: Football and basketball proponents are now scheduling "camps" during the summer, to help the kids develop skills and presumably earn their place years to come as a varsity starter. These "camps" are scheduled without regard to baseball schedules, and Vinny's team has had to forfeit multiple games due to players being absent to attend "camp".

I don't fault the players. There is a lot of pressure on young athletes these days to train more, to go the extra mile.

But why is baseball, the American pastime, seen as the "disposable" sport? It used to be, summer was baseball season. Period. But now with football and basketball training encroaching on summer, those who lose are those who, like my son Vinny, put baseball as top priority and give 110% at every practice. Without the support of teammates, baseball gets marginalized, and the hard work of players goes unnoticed. Why is it that adults pay $7 to get into a football or basketball game, but baseball games ( and band concerts, but that's another story) are free?

The All Conference selections from our team this year received no press. How hard is it for a local paper to come out and do the SAME thing they would do for basketball or football? In the interest of giving them some coverage, here they are: Shannon Hansberry, senior shortstop, and of course, Honorable Mention Vinny Sewell, 1B and pitcher mostly. Freshman.

Baseball is the American pastime, folks. The parents that sign their kids up for a team, but make other commitments for their kids for other sports that have no business being played or practiced in the summer, I have this message for you: you are letting down, and stepping on the dreams, of every kid who loves baseball and wants to play on a team that gives a shit.

And that's all I have to say about that. 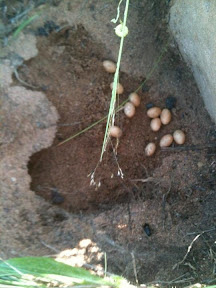 A few years ago I posted about a northern prairie skink the kids found on the gravel beach near the pond. We have since discovered that the skinks have an elaborate series of tunnels under the rocks in a fire pit on the beach. That fire pit has not been used for over a year, and if we ever feel like having a bonfire I think we'll build a new fire pit. I do not want to inadvertently roast some of the few lizards that inhabit this area.

A few weeks ago, Joe and I were turning the rocks, looking for skinks. We saw one or two adults, but we also saw what is in the photo- eggs! There are nests under at least two rocks, with about eighteen eggs total. I have been checking on them occasionally, not wanting to disturb the eggs or adults too much. I don't know how long they take to hatch, but I hope to see the old fire pit crawling with little skinks soon.

Email ThisBlogThis!Share to TwitterShare to FacebookShare to Pinterest
Labels: around sand creek, pond

Yes, I am now relegated to the passenger seat of my Ford Focus as Vinny takes the wheel any chance he gets for practice. My 6'1-1/2 (last check, though he's eating like crazy so be prepared for more growth!) son passed his permit test with flying colors. He is very conscious of driving rules while he is driving, and though I have to remind him of a few things, I am confident he will be a good driver.

Today went like this: He had to be at the school at 7:45 for a baseball game that had been rescheduled at the last minute to the town where I work. Nina, as newly appointed co-manager with her friend Brittany, attended the game as well. Vinny didn't feel like driving so early in the morning, so I picked up Brittany and Keith, her brother and starting pitcher, a half mile up the road from our house. I dropped the crew off at school on my way to work.

With the forecast in the nineties, luckily I had some flexibility with my work schedule. I did not want to spend a day out in a boat, and the interns had other work to do. So at 9:00 I was able to take a couple hours off and go to the game, just a few blocks away.

The game didn't go so well for our team. I won't even repeat the score, but Vinny had a couple good plays at first base. After the game I headed back to the office, but soon I got a call from Vinny: the bus would be a while, and he was walking over to my office. His real motive: lunch at Taco Bell! He drove there, of course, ended up driving the wrong way and parking in the Subway parking lot, but as I told him, parking is more complicated than driving.

After lunch I did a few administrative things that needed to be done, then decided to leave work early. As we drove by the ball field, we saw Vinny's coach, Nina, Brittany, Keith, and a couple others still there; apparently they had to wait for a summer school bus to finish a route. So with Vinny at the wheel, we loaded the Focus with one more teenager than it was intended for and headed towards home. On the way Vinny got to experience actually seeing a train up close at a minimally marked crossing (we survived) and driving our road when the grader had been by one side but hadn't come back, leaving a pile of loose gravel in the middle.

I think I felt a few more gray hairs sprouting.

We made it back, and I got to drive Nina to volleyball practice, she and Brittany and two other friends. Somehow the gas gauge registered near empty after that; that seems to happen a lot lately!

Sorry if I'm rambling; this 90 degree weather has me felling a bit crazy. Cooler temps on tap for here tomorrow. That, and I may have to make sure Joe makes it to his saxophone lesson. Following in the footsteps of his brother.