Was this month really March?

For having a blog that includes "phenology" in the description, one would think that I would have been faithfully updating posts these last few weeks, chronicling the unfolding of the warmest March on record. In an ideal world, that is.

Sorry folks. In reality it seems this month has gone by in a blur, busier than ever doing I don't even know what. Getting kids ready for the band trip. Helping Joe with his Science Fair project. Putting the first 3,000 miles on the new car shuttling kids to baseball and volleyball practices and shopping in Duluth. Working. et cetera.

However, those of you who are on Facebook know that it is much easier to write a quick status update than it is to compose a coherent blog post. And if we're Facebook friends, you know that I manage to update my status fairly often. That is, if you haven't hidden me from your feed because you're tired of hearing about my life! :) So, I have reviewed my last month of status updates and put together a phenology of sorts:

March began with about a foot of snow on the ground, the first significant snowfall we'd had all winter. On the evening of the 3rd, we had a visit from a friend who was out snowmobiling, perhaps for the first time this winter. The next day a warm spring wind blew in. I traveled to the southern part of Minnesota for a work meeting on the 5th and saw my first ducks and geese. On the 7th I saw my first kestrel. On the 8th we had a mini blizzard, but that snow quickly disappeared. Early the morning of the 9th, I saw the aurora borealis; I have been waiting to see this for years!

On the 11th, The Hermit and I went shopping at Menard's in Duluth (for those of you outside of Minnesota and Wisconsin, that is like Home Depot or Lowes) and picked out base kitchen cabinets, a tub/shower enclosure, and bathroom vanity- all on sale! Let's just say I love my new Discover card...

First bluebirds on the 13th; on the 18th we put up four bluebird houses in the horse pasture, with the hope that at least one of them will be occupied by bluebirds. I didn't even record when I saw my first robin, but it was well ahead of the usual schedule. First blooming dandelion on the 16th. Lots of tundra swans flying over the 17th and 18th. Woodcock have been displaying morning and evening since the 18th; I even saw a female woodcock approach a male when he landed from his sky dance in the back yard. First spring peepers on the 19th.

Oh yeah, I seem to recall something happening on the 20th. Something to do with the number 45...

So now the ice is out on the pond, which makes Sally one happy Labrador, and the ice is even out on the big lakes. Of course, with my job that means I am out on the lakes too, pulling nets as we attempt to get an idea of the health of various fish populations. I don't think I had ever been out in a boat in March. Northern pike are spawning, and walleye are getting ready.

The lake I am working on just happens to be the lake where my grandma and grandpa lived, where I spent many weekends in and on the water. My grandma, 92, lives in town now, but my uncle still has the lake home. It is fun to be back; that lake will always be special to me.

So there's what happened in the March that felt more like April or May.

My two oldest kids are now somewhere between here and Washington, DC. I last heard that they were eating dinner at the Cracker Barrel in Rockford, Illinois. Vinny ordered the catfish. :) Nina convinced me to swap iPhones and sim cards with her, because her phone is having some serious issues. I hope she is enjoying my phone, because I am cursing hers.

Really, I think this band trip, to our nation's Capitol, is a once in a lifetime opportunity for them. I traveled to DC when I was seventeen, with 4-H club, and it really changed my perspective. Actually, I liked shopping in Georgetown. But that was where I was at. I think my kids will see so much more.

The band director has created a blog: ecbandtrip2012.blogspot.com . i am having trouble copying and pasting this link on my iPad, but if you are interested, please follow it!

I still have Joe here, but the house feels so quiet. I wish the ice hadn't gone out on lakes so early this year, because that means a lot of work for me. 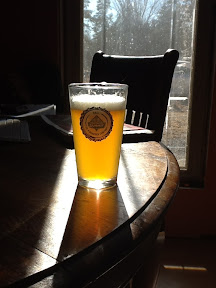 Okay, so my plans to use the iPad to increase my writing and blogging frequency so far have not panned out. But like everything else, it takes time to break old habits and settle into new ones.

This last month found me unexpectedly car shopping. The Subaru ended up totaled; apparently taking a ride over tree stumps, saplings and rocks was too much for it. But all in all I think I came out ahead on this one. The Subaru was worth more than I still owed on it, just enough money to make a down payment on a new 2012 Ford Focus. 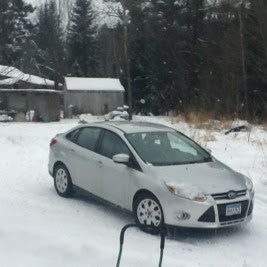 For the same monthly payment, I now have a vehicle that does not have 106,000 miles on it, does not make strange noises, and that annoying "Check Engine" light is not constantly on. Perhaps more importantly these days, I can get up to 40 miles per gallon, over ten more mpg than the Subaru. And I can plug my iPod into the sound system. I will miss the heated seats though.

Notice the snow in the picture. Until Wednesday, snow was something that was missing from this winter around here. Between Tuesday night and Wednesday morning, however, we received over a foot of snow. and the kids and I were delighted to have a day off from work and school (my office was officially closed, something that rarely happens). I always think Leap Day should be a bonus day anyway.

The boys are at baseball camp this afternoon; I am enjoying a quiet day in the house with Nina, Sally, and the cats. I plan to get out a musical instrument in a while, but for now I have an Extra Pale Ale brewing on the stove, and bread in the bread machine. I have decided recently to try and make more essentials, like bread and beer, at home. I can save a little money that way, especially on the bread, but more importantly, it's hard to find a loaf of store bought bread that doesn't have all kinds of strange ingredients, and too much sugar or high fructose corn syrup.

Well, it's time to put the brew pot out in the snow to chill. But hey, I blogged! :)
- Posted using BlogPress from my iPad