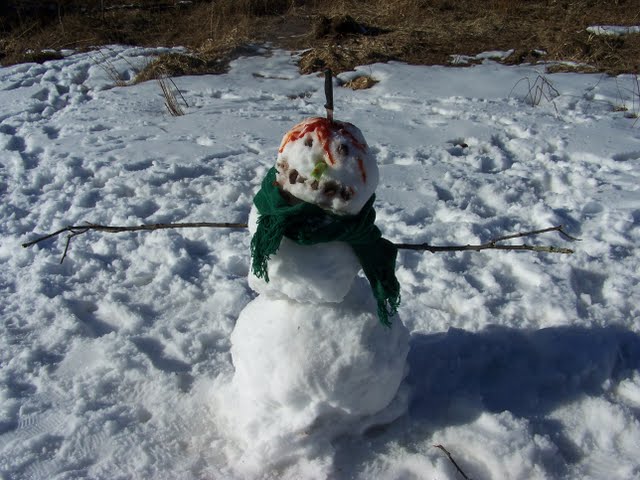 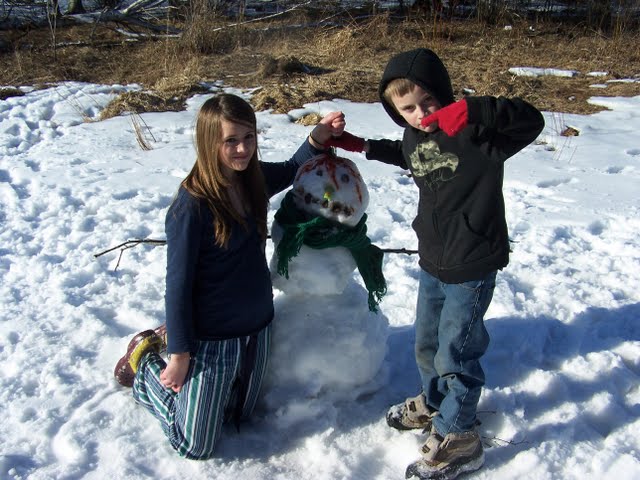 Starflower and Mr. Attitude are pretty close these days. They come up with all kinds of unique ideas to celebrate their week off from school. I had a well-deserved laugh when I came home tonight and saw this. Kinda reminds me of the Calvin & Hobbes snowmen!
at 8:18 PM 7 comments:

Calvin has a new friend at school. Last night they went to a movie, and today his friend went to baseball camp to be Calvin's catcher. What makes this friendship special is that Calvin and he are distantly related. Very distantly. Here's the deal: My aunt (mom's brother's wife) is a cousin of the kid's grandma. I don't even know if there is a technical term for that kind of relation. Tail of the shirttail maybe? Anyway, Calvin is kind of proud to hang out with his "cousin".

I think the reason Calvin enjoys this connection is because we don't have family in the immediate area. My dad and brother and his family are a hundred miles away, while my aunt and uncle and grandma are a bit closer at sixty miles away. The Hermit's family are all in Michigan and Ohio; one of our nephews is even an attorney in Ireland. I'd love to visit him some time! But there are a lot of families around here that have been here for a long time and have scores of relatives within a stone's throw; Calvin and Starflower's best friends up the road are an example. So finding a connection with someone in the area is probably important to them.

I grew up seeing my first cousins infrequently. They lived in Walla Walla, Washington, St. Augustine, Florida, and Newton, Massachusetts. I barely know them. I have a few second cousins I saw more frequently, but I am not that close to any of the family. So I can totally understand Calvin's enthusiasm at finding someone he is related to, however distantly. :)
at 3:23 PM 6 comments:

Email ThisBlogThis!Share to TwitterShare to FacebookShare to Pinterest
Labels: family

The first of March (or, my annual optimistic spring-is-almost-here post)

The first day of March should be considered a holiday. I’m talking a full blown, no holds barred celebration complete with music, dancing, bonfires, and revelry!

Why, you may ask, especially if you live a lot closer to the equator than I do. Why? The official explanation is that the first of March is considered to be the first day of “meteorological spring”. That is, the typical coldest 90 days during the calendar year, December 1-February 28, are behind us.

In my mind, winter officially loses its death grip when the calendar page turns over. Yes, we may still have some nights of subzero temperatures, and you can expect a snowstorm or two. But when March arrives, whether as a lion or a lamb, the weather is guaranteed to get warmer. Sooner rather than later. Snow will melt on a sunny day and freeze with a solid crust at night. Patches of open ground will be revealed. The cool sweet smell of damp earth will permeate the air at twilight.

The warmth of the sun and the motion of flowing water will work together to break through the fragile ice on the Kettle River. The newly opened patches of water will attract a pair of trumpeter swans or Canada geese or hooded mergansers. Kestrels and red winged blackbirds will appear over every marsh and field as the tawny grasses emerge from their winter snow cover.

And I will emerge once again from what always seems like the long sleep of winter. I will plant seeds, which is after all one of the most optimistic acts in the world. I will bask in the warmth of a sunny afternoon at the south facing window by the wood stove, and not know which is warming me more. In my hands will be a musical instrument playing tunes that seem just a bit more lively than I played a month ago.

Then I will go outside, running, laughing, filling my lungs with cool air at sunset. And so it begins again, as it always does.
at 3:06 PM 8 comments: