Remember the stuff I had growing in my compost bin? Take a look now. I love this kind of gardening! 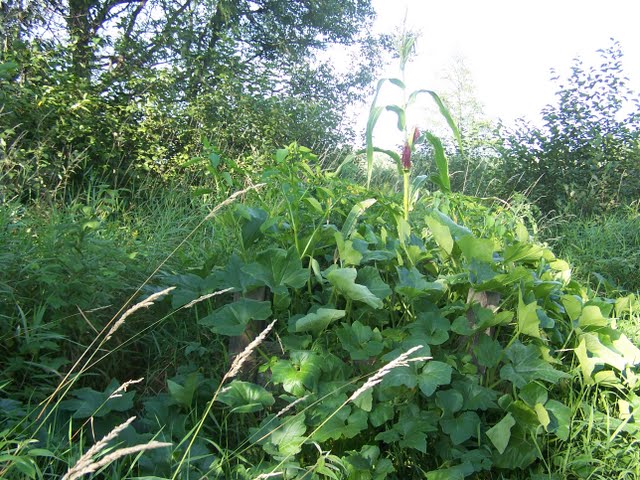 Yeah, there's a compost bin in there, somewhere. But it has been overtaken by squash, tomatillos, corn, and a tomato plant, although like most of my other tomatoes this year, it is not faring well. I don't know what it is with me and tomatoes this year. Oh well. 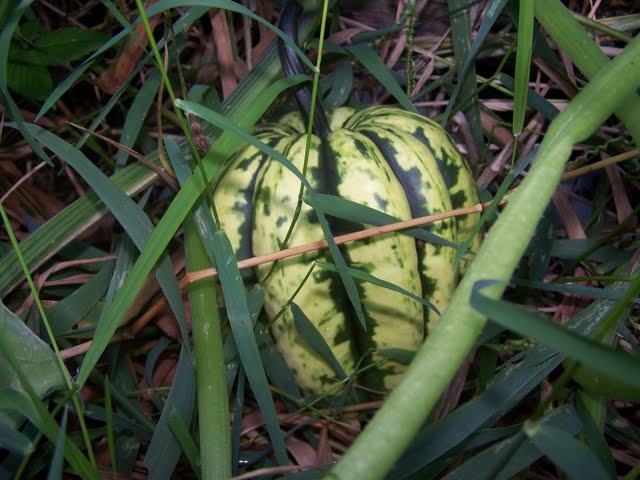 I have at least five of these acorn type squash ripening on the vine. The funny thing is, they do not look like any acorn squash I have ever planted before. The coloration looks a lot like Delicata squash, which I did plant last year, in the same bed as acorn squash. I think they somehow cross-pollinated, and the seeds I scraped out of one and tossed in the compost bucket grew into this. I can't wait to try the result; maybe I have come up with a new heirloom! Delicata are delicious, acorn squash are delicious. A cross between them....we'll see!

I also have at least three Montana Jack pumpkins growing where I planted them last year, but where this year potatoes are ready to be harvested. And I will have a bumper crop of tomatillos from several garden beds, even though I did not get around to planting them this year. I love this kind of gardening.
at 7:15 PM 4 comments:

I don't know about my whole blog energy lately. This blog is such a part of me I will not quit it, ever, but I just have a hard time keeping up. Maybe it's the whole computer location thing. The computer is still in the cabin, which is just out of WiFi range of the house. I can't get used to blogging on my iPhone anyway, the computer needs to stay in the cabin for space and gaming reasons (the XBox is there, dammit!), and it is hard for me to come out the the cabin and write what I want to write. And I do really want to write.

So what does this mean? I don't know. I know that I want to write, and I have to keep working at it. I know that there are so many things I want to say that remain unsaid. I will work at it.

Did I mention my son Vinny is now at least 3 inches taller than me, and my daughter Nina is catching up fast? Wow. And Vinny made a pretty mature decision to not go out for football. Or basketball. He is a baseball guy. And I like that. Football takes so much time, what with two a days and all that, and I think as long as he concentrates on his talents, which include baseball, music, AND every topic in school, he will do all right. He actually told me "I will have more time to focus on academics." To hear this from a 14 year old kid is priceless. He told me his math teacher said he was probably the smartest kid in his class. And I believe it!!

Ah, time. Vinny drives the old truck like it's second nature. Next summer he will be taking driver's ed. Meanwhile, I stop and try to breathe in every last breath of August that I can...