I'm sitting here in the cabin, where the computer is located, watching a Lawrence Welk public TV pledge special. How nerdy is that? Actually, Lawrence Welk brings back warm fuzzy memories of evenings at my grandparents' house. There was an innocence and earnestness about those shows, along with a healthy dose of corniness, that sticks with me.

I've been kind of floundering this week, re-adjusting to having free time in the evenings again. Being in "Hello, Dolly!" with Starflower was a good experience. I'll never forget the energy the cast brought together, and the feeling of performing a quality show for local audiences. That's what I love about community theater- it's one thing to pay exorbitant prices for tickets to a traveling Broadway show, but a totally different, wonderful thing to see people you see regularly show their hidden talents and bring a Lawrence Welk-type earnestness to every show. That said, I don't know if I'll do it again. It's a huge time commitment, I have a few other musical projects I might rather work on, and it would have to be a show I really like. Please, Ms. Director, don't even consider "The Music Man!"

So I'm coming off that, the darkest part of winter is upon us (well, not the darkest yet, but the month leading up to the darkest day is pretty dreary), and for some reason my mind has been cluttered with random thoughts. I've found it hard to focus on anything lately. I've tried to remedy that by starting to do yoga, but so far whenever I get near the yoga mat I have three cats and a dog wanting to get in on the action. That, and I can't figure out how to hook up the Blu Ray player and there are no batteries in the remote so I haven't been able to watch a yoga DVD. So today I did probably a better thing...I went for a walk outdoors. The air was crisp, and a dusting of freshly fallen snow sparkled in the sunlight. I went out to the pond first, which had several inches of ice, enough to walk on. There was some slush above the ice on part of the pond though, so I'm going to wait a week or so and hopefully it will freeze enough to shovel for skating. Then I walked along a ridge which used to be the edge of a gravel pit in the 1930's. I saw lots of deer and rabbit tracks, and even a few snow free spots where the deer had bedded down for the night. I followed the old main railroad grade back to the railroad siding which leads back to the cabin. I noticed a lot of fallen trees since I had last walked that way; our big wind storm in late October may have brought down some dead and/or dying wood.

I came out of the woods with a new sense of clarity. Not completely clear, but it was what I needed to get back into living on this late November day.
at 8:05 PM 3 comments:

Email ThisBlogThis!Share to TwitterShare to FacebookShare to Pinterest
Labels: around sand creek, life 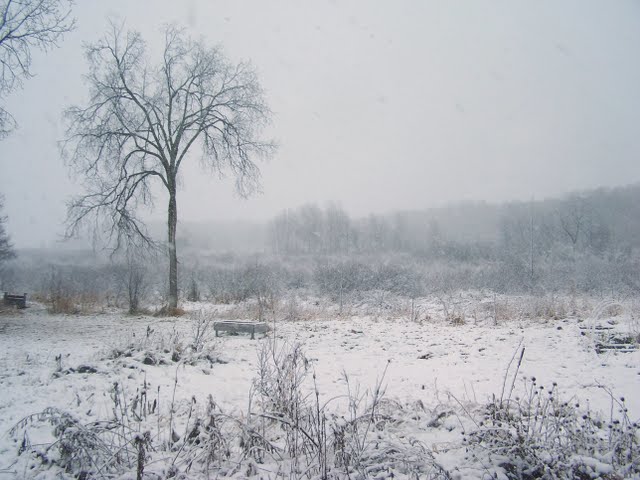 I spent the morning taking care of unfinished summer business while the snow fell, like bailing water out of a canoe and kayak and turning them over on shore. I guess this is to be expected for this time of year, but last week's 60 degree weather had me thinking there would be more time.

This is going to be a busy week. Dress rehearsal for "Hello Dolly" is tomorrow evening, complete run-through rehearsals on Monday and Tuesday, and a morning performance for the elementary school on Wednesday. Then evening performances Thursday-Saturday, and a matinee on Sunday. So unless I find something really unusual to blog about, see you a week from tomorrow!
at 2:32 PM 5 comments:

under the blue roof

My other blog is back after a long hiatus. Check it out! (the link is on the sidebar)
at 10:30 AM No comments:

Email ThisBlogThis!Share to TwitterShare to FacebookShare to Pinterest
Labels: blogging

Like many people yesterday, I was in a state of shock, anger, and despair at the election results. Not that I had any particular affinity for the Democrats that were defeated, but that mean-spirited divisiveness had once again prevailed. I think that many people voted with emotion, whipped into a frenzy by rallies and slogans, instead of reason. And I fear that many average people—working class neighbors, churchgoers, men and women who gather in Main Street diners across the nation—were manipulated. The media industry told them they were dissatisfied, and since people have a tendency to want to identify with a group (the tribal mentality), they started feeling more and more dissatisfied. And sincethat media industry has taught us we no longer need to be civil in public discourse, hateful words flew like never before.

I admit to getting caught up in that negative energy at times, letting it consume my thoughts. Last night I vented my despair on Facebook, which is good for purposes like that. What followed were some very thoughtful comments that helped me to put things in perspective. I will repost them here:

John: Actually, no one having a clear majority for a while might be good. I'm hearing some Republicans admitting that they do not have a mandate. Maybe that whole, "listen to the people" thing might happen. Yeah right, beer me.

Robin: It always blows my mind that there are powerful people who think destroying the environment is an acceptable way to make money. Like they don't have to drink clean water or breathe clean air. Short-sighted lunatics.

Will: Note to Deb: the federal govt is a lost cause. Has been for awhile. Not that they wont cause trouble (er.. not be honest about real troubles). Concentrate on local, on social networks. sustainable agriculture & culture. permaculture. Read up on Sharon Astyk, Transition Town, Nicole Foss ("Stoneleigh"), etc & other wise souls. listen to nature, forests, wildlife. work for peace.

Hello my friends! Take everything easy. Whatever will be, will be. Don't make your own judgment. As long as you know you are doing good things for people, no matter what other people may think or say about you, just continue with ...what you are doing. Then you will find peace in your mind. Then you will live a happy life.

Laura: Easy there, Deb. I've been really down this week; I know, despair is so tempting, but remember this: we who are tempted to despair, we who notice, we who care: we need each other.

Vicki: Well, I've been blue today, too, finding it hard to believe that arrogance and self-interest continues to rule. Then I remember what my grandmother always said: Pride goes before a fall. I believe it.

Today is a new day. Life is too short to get caught up in despair and helplessness. So I will stop spending my precious energy raging against what I cannot change. I will do what I can to make my small part of the world a better place. I will smile and say hello to strangers. I will attempt to understand and listen to someone I do not like. I will sing and dance. I will play the flute. I will plant a garden. I will do crazy, fun, spontaneous things with my kids. I will teach what I can. I will always be learning. I will practice compassion. And, as Wendell Berry says in Manifesto: The Mad Farmer Liberation Front: I will laugh. Laughter is immeasurable. I will be joyful, though I have considered all the facts.

Edited to add: There were actually some good things that happened on the local level. Our county elected a new sheriff, who I believe will make much-needed improvements to local law enforcement. My district re-elected two state legislators, both whom I know personally and I think are outstanding people. And they both have family members in "Hello, Dolly!"
at 12:08 PM 1 comment: