I and the Bird: call for submissions!

I am way late on this. I have known for several months that I would be hosting the 120th edition of I and the Bird, the carnival of bird blogging. But nevertheless, the event has sneaked up on me and the time for submitting your excellent bird blog post for inclusion in this edition is NOW! Well, actually you have until Tuesday, but don't leave me hanging! Drop me an email with a link to flutemandolin AT gmail dot com. Thank you!
at 8:20 PM 5 comments: 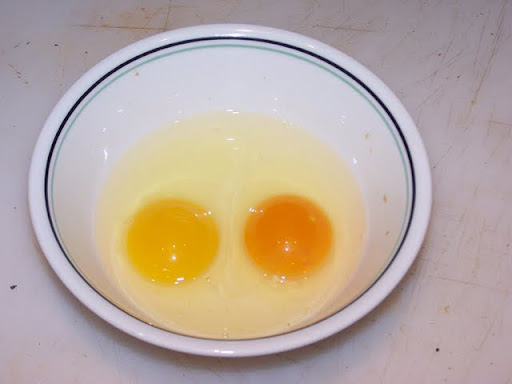 On the left, a "local" egg from our very local huge chicken operation that stinks up the air regularly. Our school is downwind from this hatch house, and we always dread a wind from the northwest if there be football games, or baseball, softball, or track meets.

On the right, one of our homegrown eggs. They have not had any special organic feed, nor have they had much space to roam. This is just what it's like to have fresh home grown eggs. I can almost see the Omega 3's!
at 9:17 PM 15 comments:

Since I have nothing to say here, as has been the February curse, go check out I and the Bird, the carnival of bird blogging, over at the eloquent Laura's blog, Somewhere in NJ.

I'm up next for hosting, so if you have anything bird related, let me know! My e-mail is on the sidebar, or just leave a comment and I'll get back to you.

My coworker saw a red headed woodpecker today. Damn. I mean, good sighting! ;) I haven't seen one in years!
at 7:56 PM 2 comments:

This is a test of 1) my new AMAZING toy (more below); 2) my fledgling skills at creating a video from audio and still pictures on Windows Movie Maker; and 3) my ability to record myself without freezing in stage fright.

For my anniversary/early birthday present The Hermit got me something I didn't even know I'd been wanting: a portable digital audio recorder. Well, actually it's way more than that; it has a tuner, preset rhythms, effects, it does everything but play flute/banjo/mandolin/whatever for me.

There's so much I want to do with it I didn't know where to begin, so I thought I'd just pick one of my favorite songs, play it, and try not to be too much of a perfectionist about the finished product; after all, I was more anxious than anything to share some of my music with you! This is an Irish reel called "The Laurel Tree".

A couple weeks ago I commented on RuthieJ's blog about how beautiful I thought southeastern Minnesota looked, but that I had hardly ever been to that part of the state. Really. I have been to the far northeast and southwest corners of Minnesota, and spent some time in St. Peter and Park Rapids, but by far most of my Minnesotan experience has been limited to the east central part of the state.

Last week at work my boss asked me if I would be interested in a training opportunity to be held this fall in southeastern Minnesota. In previous years I would have balked at the time commitment, but now I think the time is right. Plus, in these economic times, I see additional training as a valuable asset in making myself indispensable. ;)

So it looks as though I will be spending a week or two in October in far southeastern Minnesota, becoming fluent in fluvial geomorphology. And maybe spotting some migrant birds?

They say there are no coincidences. I'm starting to believe they are right.
at 8:51 PM 8 comments:

Email ThisBlogThis!Share to TwitterShare to FacebookShare to Pinterest
Labels: Minnesotarctica, my job, thinking out loud

No, I haven't dropped off the face of the earth. I have just run into a paucity of bloggable moments, coupled with a paucity of computer time. Someday I will have my own laptop. Darn kids.

Seriously, in late January/early February, nothing is happening in Minnesota. I haven't even had any notable birds at my feeders. I have heard a few great horned owls calling, but generally there is a lack of wildlife wonder around here.

Today I cleaned/organized the room that will eventually be The Hermit's and my bedroom. A little wiring, a little drywall, and get the tools and building supplies the heck outta there! I am so ready to have a finished house, and so realizing it's not going to happen any time soon.

Starflower and Mr. Attitude were having a good time sliding down the stairs on a piece of cardboard that was part of the box our big TV came in, the box I finally removed from the future bedroom today.

Calvin's basketball season is winding down. They have one game left, at a town so far away I probably will not be attending. But the game I watched this week was good enough for me. He scored six points, had some great defensive moves, and played almost the entire second half. One of his best friends was on the other team, they had the same number, and ended up guarding each other...fun to watch!

In musical news, we have a new Yamaha keyboard in the house, with (literally) all the bells and whistles. Starflower and Mr. Attitude needed something better than our 20 year old muddy sounding Roland for piano practice, and we don't have a good place in the house for a real piano. But when you have a gazillion different sound effects, a real piano would just be so BORING! The interesting part is, Calvin has taken a great interest in the new keyboard. He has never taken a piano lesson, but he can figure out how to play the trumpet part from a band song on keyboard (Calvin plays alto sax). I know enough about playing music to think that is amazing.

So that's the news from the doldrums of winter.
at 9:08 PM 4 comments: