A bad run, and a good run

I am coming off a respiratory infection. After boxes of tissues, and a strange feeling in my chest, I think I may be getting over a mild case of viral pneumonia. Confirmed by my run today.

I started out good. I parked at a wildlife management area just west of the town of Sturgeon Lake, and headed east on County Road 46, the paved road I had just driven on. There was very little traffic, except, as I would find out later, my son and his friend. They had camped out on the Kettle River, fishing into the night. I don't remember seeing Keith's truck, but I am glad they had a great fishing adventure.

I ran my first mile in 10:30. Pretty good, but it was mostly downhill. I realized I would have to make up the altitude later.

My plan was to run that county road to a gravel road that would take me to an ATV trail that would take me to an old railroad trestle over the Kettle River. Then over that, another mile or so, back to the county road. 7 miles or so. But, after mile 2, I realized I was struggling. I could no longer run more than a quarter mile or so without feeling short of breath. My legs were willing but my lungs were weak.

I found the trail and ran/walked to the river. It was there I had to confront another demon: fear of heights. I knew this run would lead me onto an old railroad trestle. I just didn't realize I would be at treetop height before I was actually over the river. Crazy fear I know, after all this bridge was built for trains, and now all terrain vehicles weighing much more than me cross it every day. But still. I did not make it across the bridge. 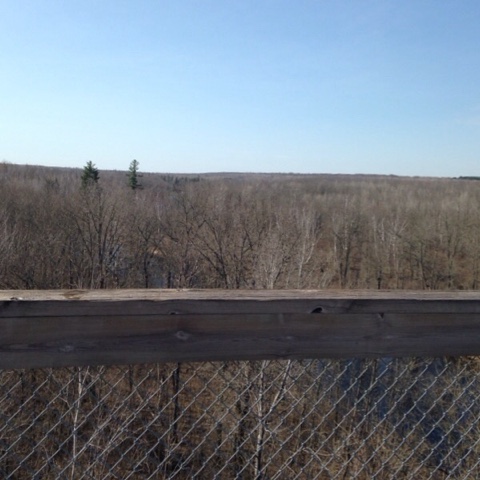 This is the lovely view I had from the bridge. I'm sure it would have been even better had I made it across the bridge.

The rest of the run, if you could call it that, was hard. I ended up going back along the trail to a road that would take me back to my car. I tried to run when I could, but my snot loaded lungs would have no more. When I hit 5 miles I called it quits on Map My Run, even though it was about a half mile to the car. I gladly opened my Bell's Two Hearted Ale, about an hour and five minutes after I started. A measly five miles. With the Garry Bjorklund Half Marathon in two months. Oh well.

I was glad I ventured out to new territory for my run. And next time, I am going to cross that bridge.
at 6:03 PM 2 comments: